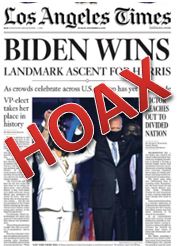 We are living in a time of hoaxes, an era of deceit on an unprecedented scale.

Global warming/climate change was one of the first great hoaxes of the 21st century, inherited as it was from the late 20th century.  It is impossible to logically assert that man-caused global warming is occurring, as the planet has warmed more rapidly at several points in the past, prior to the industrial revolution — and even before Homo sapiens came into existence.  And the climate, like nearly everything else, has always been “changing.”

The Russian Collusion Hoax came next, that being the preposterous idea that Donald Trump and his minions colluded with Russia to steal the 2016 presidential election away from the rightful winner, Hillary Rodham Clinton, who had previously rightfully stolen the Democratic nomination from Bernie Sanders.  This hoax was also persistent, hanging around for years with absolutely no substance to it (much like Nancy Pelosi).  This hoax has by now been debunked, repeatedly (something I wish we could say about Nancy Pelosi).

More recently, would-be Marxists from Antifa and Black Lives Matter joined anarchists and assorted other pathetic morons in looting and burning down large swaths of major American cities.  Their apologists in the media cheered them on, incessantly referring to them as “mostly peaceful protesters,” as windows were shattered, fires raged, and buildings collapsed behind the very on-air “journalists,” reporting from the scene, that touted their peacefulness.  Amusingly, in a few cases, these television reporters trotted out the “mostly peaceful” meme, even as they had bottles and debris hurled at them by the kind and gentle demonstrators.  The “Mostly Peaceful Hoax” was born.

Then came the Coronavirus Hoax.  Don’t get me wrong: I’m not saying the existence of the virus itself is in question.  Nor am I denying its seriousness.  But the experts and the media deliberately attempted to create a worldwide panic by proclaiming COVID-19 to be the most dangerous plague ever to afflict mankind.  At first, they claimed we needed “15 days to flatten the curve.”  After this decree was nearly universally and obediently followed, somewhat surprising them, they told us wide-scale lockdowns were needed, businesses had to be shuttered, jobs abandoned, and facial masks worn indoors and out.  Mass social justice rioting was okay, they informed us, but attending church, weddings, or funerals was not.  Dr. Fauci gave his imprimatur to “swiping right” and having anonymous sex of any sort with a stranger, as long as both parties donned masks, but, like other experts, he noted that it was too risky to visit your grandmother in a nursing home.

Most recently, President Trump’s large lead in several states at the close of their polls on election day was, in virtually every case, somehow eclipsed in the days (overnights, wee hours of the morning to be more precise) to come, amid stunningly widespread allegations of cheating, malfeasance, vote-stealing, and system “glitches.”  Yet, after spending four years propagating the notion that Russia (and probably Macedonia by way of its content farms) had meddled in our last presidential election, leading to the Bad Orange Man becoming commander-in-chief, Democrats now tell us it’s literally impossible to hack an American election and that Trump-supporters are just a bunch of sore losers and whacko conspiracy theorists.

In 2016, after Trump shocked them by winning, they urged people to “resist” Trump and his administration, no matter what.  Resistance was patriotic, you know.  Today, they demand we “unite” with the Harris-Biden Biden-Harris administration and its supporters, for the good of the country.  Because, uniting behind whoever wins the presidency is patriotic, you know.  The “Great Election Hoax of 2020” is a breathtaking example of chutzpah, hypocrisy, and immorality…even by modern-day Democrat standards.

Choosing the Hoax of the Year is arguably more difficult in 2020 than doing so for any other year in history.  Each of the hoaxes have great merit and are truly preposterous in their own right.  In light of the challenge, I’ve put much thought into the matter.  Eventually, it dawned on me that the hoaxes are all related, virtual crimes perpetrated by progressives on the American people.

Democrats shamelessly used the coronavirus hoax to persuade Americans to vote by mail, allowing them to steal the 2020 presidential election, pending legal challenges.  They then swore to any and all that the process and counting of ballots were all done entirely on the up and up, inconsistencies and anomalies be damned, only weeks after they continued to promote the idea that the 2016 election result was somehow engineered by the Russkies.  In summation, they used the coronavirus hoax to give them the opportunity to get their own woman man elected, and then told their soon-to-be subjects to shut up and accept the results with class and dignity, and that the numerous accounts of election fraud were nothing more than the fevered dreams of far-right fascists.

Since 2020 is not yet over, it is problematic (to use a word progressives like) to choose a Hoax of the Year this early…but I have anyway.  In fact, I’ve chosen two.  The remarkably rapid pivot from the Russian Collusion Hoax to the Great Election Hoax of 2020 clearly constitutes the greatest back-to-back hoaxing in recorded history.  Therefore, I award them a tie for 2020 Hoax of the Year.

In Case You Missed It:  VIDEO: African WH Reporter Simon Atebe: Biden Administration a “Disaster” – The “Level of Discrimination Against Me is Outstanding”
Posted in Tyranny.