Get the motive for voter fraud now? Get the fear factor? Don’t look for any other reason. Trump knows firsthand the depth of their corrupt, seditious and even treasonous acts…and they themselves know it too! 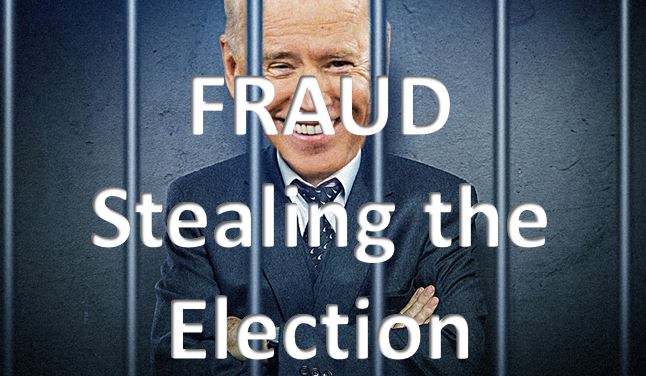 The ‘journalists’ of the news media have begun the relentless drumbeat of proclaiming ‘President-elect Biden.’ This is make-believe.” Writer Chris Farrell

Shortly before the November 3rd election for President of the United States, the proprietors of storefronts, buildings, restaurants, dealerships, and businesses of all types across our entire vast country boarded up their facades in anticipation of widespread rioting, arson, looting, massive destruction and violent assaults by Republicans if Joe Biden won the contest.

Just kidding. In fact, these measures were taken to avoid the by-now familiar acting-out violence that Democrats and the thugs they support in Black Lives Matter and Antifa have been demonstrating for the world to witness for the past six months—in at least 15 once-peaceful Democrat-run cities—when they object to this or that policy, statue, police department, et al.

It goes without saying that those proprietors—who spent multi-thousands of dollars to protect the businesses that support their families, and that help them pay taxes to our government, boarded up their properties knowing that if President Trump won reelection, they would be the merciless targets of the bought-and-paid-for Democrat anarchists who unfortunately symbolize today’s Ugly Americans.

Interestingly, several days after the election and in eager anticipation of the Biden-Kalamity [premature and erroneous] announcement of their victory, a large crowd of Tolerant Democrats rallied outside the White House, as always spewing vulgarities and displaying placards expressing nastiness and filth. Who can draw a conclusion other than the Democrats are both sore losers and sore winners?

We have still to learn the outcome of the election, thanks to the new and unprecedented Covid-dictated “rules” about mail-in ballots, late voting, delayed returns, strange rulings by Democrat-appointed judges, and chilling reports of such rampant voter fraud by Democrats that it defies what any American—living or dead—has ever seen.

Why? Because the Never-Trumpers and, again, the bought-and-paid for corrupt media, were beyond desperate, having failed thunderously for the previous four years to take the president down and to bring about the coup d’état they have dreamed about since 2016.

What to do? Why, rig the election, of course!

Below is just a tiny sampling of the massive voting irregularities and fraud that were discovered both before and after Joe Biden and Kalamity Harris declared victory through their media lackeys, in clear defiance of the U.S. Constitution and 243-years of American tradition: 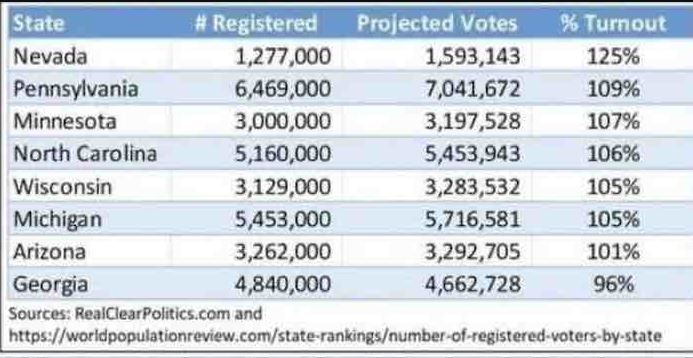 But don’t take my word for it. Here, in his own words, is Hunter Biden’s father boasting of having participated in developing “the most extensive voter fraud organization in history.”

An onion, as everyone knows, has many many layers. Just try peeling an onion to see why it is the perfect metaphor for complicated subjects that require many levels of exploration to plumb their depths and understand their meaning.

But the Trump onion phenomenon has only two layers, both of them psychological.

The first layer is jealousy, which I have always believed is the strongest human emotion, going back to the Bible. Stronger than hatred. Stronger than anger—responsible, in fact, for most criminal acts, from theft to conspiracy to violence to murder. This is the stuff of tragedy… and also, sometimes, redemption.

In our metaphorical onion, the human emotion that competes most ferociously with jealously is fear. One has only to look at the international dread of the Covid-19 virus to see the power of fear to destroy economies, isolate human beings for months on end, and inspire Democrats to defy the U.S. Constitution and the rule of law in order to try to rig the most important election of our lifetimes in their favor.

But what do the Regressives among us have to be afraid of?

You could speculate that what fuels the hostility of the Left is not fear, that it’s resentment because of the mountain of bruised egos the Democrats have experienced after working mightily for over four years to depose, sabotage, impeach, and topple the Trump presidency—all crashing failures—and that a Biden victory would allow all of them to save face. After all, even the passage of time rarely calms this kind of narcissistic injury. While this theory may be plausible, it’s not very compelling.

Then what? It’s so obvious. The reason why Democrats have spent billions of dollars to defeat President Trump is not because of their Marxist ideology and not because of their massive investments in the global economy, but rather because they are rightly terrified that when President Trump is announced the winner, an avalanche of indictments, trials, and lengthy prison terms will rain down on them—on all of them, including the very top of the top echelon.

As one small example, reported by Brannon Howse: In 2003, CIA contractor Dennis Montgomery built the Hammer (discussed above) as a foreign surveillance tool, but it was subsequently commandeered in 2009 by the Obama regime (including CIA Director John Brennan and Director of National Intelligence James Clapper), which turned Montgomery into a whistleblower who testified that among 600-million pages of documents stored on the program’s 47 hard drives—which were turned over to the FBI—were 10,000 pages of documents regarding Hunter Biden and Joe Biden, including videos and images.

Get the motive for voter fraud now?

Get the fear factor?

Don’t look for any other reason. Trump knows firsthand the depth of their corrupt, seditious and even treasonous acts…and they themselves know it too!

In Case You Missed It:  Joe Biden Refers to Supreme Court As “Extremist Court” in Meeting with Governors on ‘Abortion Rights’ (VIDEO)
Posted in Tyranny.

The academic achievement gap between black and white students has proven resistant to most educational policy changes. Some say that...