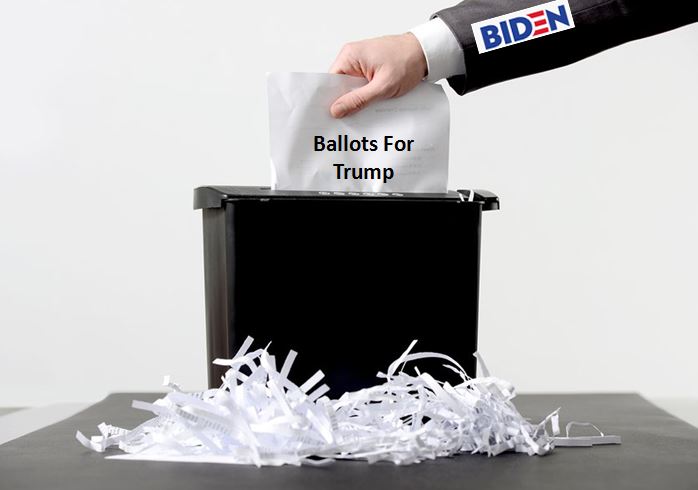 Donald Trump’s attorneys and investigators say he was winning Michigan by a landslide until ballot-counting computers were turned off in the middle of the night.  When they were turned back on, Joe Biden suddenly not only closed the gap, but surged ahead.

“My colleagues and I … have studied … the November 3, 2020, election results,” said computer security expert Russ Ramsland of Allied Security Operations Group in a sworn affidavit Tuesday.  “Based on the significant anomalies and red flags that we have observed, we believe there is a significant probability that election results have been manipulated[.]”

Until about 2 A.M. election night, Trump was running ahead in Michigan, “generally winning between 55% and 60% of every turnout vote,” said Ramsland.  “Then after the counting was closed at 2 a.m., the situation dramatically reversed itself, starting with a series of impossible spikes shortly after counting was supposed to have stopped.”

Here’s Ramsland’s explanation: “The several spikes cast solely for Biden could easily be produced in the Dominion system by preloading batches of blank ballots in files such as Write-Ins, then casting them all for Biden using the Override Procedure … that is available to the operator of the system.”

“There were 289,866 more ballots processed in the time available for processing in four precincts/townships, than there was capacity,” said Ramsland.

In plain English, that means they counted almost 300,000 more ballots than physically possible.

“This is not surprising because the system is highly vulnerable to a manual change in the ballot totals as observed[,]” said Ramsland. “[W]e believe that these statistical anomalies and impossibilities together create a wholly unacceptable level of doubt as to the validity of the vote count in Michigan, and in Wayne County, in particular.”

The Dominion “systems contain a large number of vulnerabilities to hacking and tampering,” according to Ramsland.  “These vulnerabilities are well known, and experts in the field have written extensively about them.”

The state of Texas rejected use of Dominion because of its vulnerabilities to hacking and cheating.

Ramsland’s affidavit was given under oath and penalty of perjury.  He lays out in it what happened in Michigan, how Dominion voting machines were operated, and how a big Trump win suspiciously turned into a loss.  The startling discoveries above are only a portion of the numerous alarming “red flags” Ramsland’s investigation found.  And Michigan is only one of many U.S. states that used Dominion systems to count votes and determine winners on Nov. 3.  Michigan’s response is that there were no improper irregularities and that unofficial vote totals show Biden winning the state by about 3%.

See for yourself what Monica Palmer and William C. Hartmann, two courageous Wayne County election officials who refused to certify the highly questionable voting results this week, found beyond the pale that prevents them from certifying the election in good conscience.  Their lists of irregularities are staggering.

The mainstream media will not publish these details precisely because they illuminate the corruption they want to keep under wraps.  Read them and weep.  Then share them.

Mark Landsbaum is a Christian retired journalist, former investigative reporter, editorial writer, and columnist.  He also is a husband, father, grandfather, and Dodgers fan.  He can be reached at [email protected].

In Case You Missed It:  Massive 145-Country Study Shows Sharp INCREASE of Transmission and DEATH After Introduction of COVID Vaccines
Posted in Tyranny.

Scientific Evidence that Masks Do Not Protect

Dr. Kaufman presents a study that finds that there is no significant statistical difference between wearing a mask and not...