Washington treats its own officials differently than average Americans. We’ve known this for decades. But now we have shocking new evidence that high-ranking DOJ officials routinely escape prosecution for crimes that would land most people in jail. 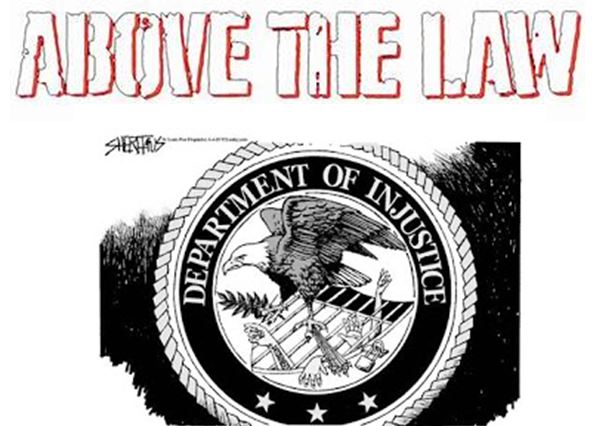 RealClearInvestigations… examined several instances of DOJ employees committing crimes but not getting prosecuted. For example, an FBI attorney shoplifted from the Marine Corps Base Quantico Exchange multiple times before getting caught with $257.99 worth of stolen cosmetics. She admitted to also stealing from other stores but wasn’t prosecuted.

“Not that it was a surprise. The Justice Department regularly declines to prosecute high-ranking current and former department officials, even when its Office of Inspector General provides the grounds for it,” the outlet reported. “The Department of Justice OIG does not keep complete public records on the number of prosecutions that result from its investigations. But the office does keep track of certain cases – those involving wrongdoing by senior DoJ managers and officials that Justice declines to prosecute.”

In 2019 alone, the OIG “issued 27 such reports of alleged wrongdoing by senior Justice Department officials and employees that went unprosecuted – everything from nepotism in hiring, to making false claims on mortgage documents, to ‘lack of candor’ with federal investigators, to sexual assault.” You might recall the “lack of candor” crime, as it related to former FBI Deputy Director Andrew McCabe lying to federal prosecutors regarding his role into the false claims that President Donald Trump’s 2016 campaign colluded with Russia to steal the election.

Former FBI Director James Comey was also referred for prosecution by the OIG.

This behavior is absolutely unacceptable, but it will continue as long as federal officials believe they are immune to the will of We the People.

We must restore our control over the politicians and bureaucrats who work for us in Washington, and our most powerful tool is found in Article V of the Constitution.

Article V allows the states to call a convention for the purpose of proposing constitutional amendments. At this Convention of States, states can put forward amendments that limit the power and jurisdiction of federal officials, Congress, the President, and the Supreme Court.

These amendments will reduce the scope and size of the federal government, but they will also have a less tangible effect. They will remind our “leaders” in D.C. that they work for us and that we can hold them accountable.

The days of the “elite” in Washington must come to an end, and we can make it happen if we work together to call the first-ever Article V Convention of States.

For example, the U.S. Attorney for the District of Columbia – who would have jurisdiction over misconduct committed in Washington – puts out press releases announcing indictments and convictions. In 2019 there were press releases regarding any number of murders, robberies, and molestations – the all too common crimes of any big city. But Washington being the seat of government, there were announcements of indictments and convictions of government employees, including cases of bribery at the Department of Housing and Urban Development and at Veterans Affairs, as well as espionage at the departments of State and Defense. But none of the 2019 releases involved wrongdoing by senior DOJ officials.

In addition to not getting prosecuted, it also appears top DOJ officials don’t usually get publicly named for their crimes.

The difference was most start with Special Counsel Robert Mueller’s investigation into the allegations of Russian collusion. Mueller “repeatedly used the full force of the law to convict associates of President Trump of process crimes, especially the crime of making false statements to government investigators,” RCI reported, while DOJ officials who did the same received no punishment.

Further, former high-ranking officials get off scot free for crimes such as impersonating a government official or using one’s position for special treatment:

A former deputy assistant attorney general was not happy that his brother was sharing a hospital room with another patient. A January 2019 OIG report states that he called the hospital claiming he was “the No. 4 person with the Department of Justice.” Leveraging that falsehood, the former Justice official demanded his brother be moved to a private room. The hospital complied.

When questioned by agents of the Department of Justice Inspector General, the former high-ranking attorney readily admitted he had committed “an ethical violation.” He “also agreed that his conduct amounted to the impersonation of a government official.”

Still, he was not prosecuted. DOJ spokesperson Wyn Hornbuckle told RCI that high-ranking department officials get no special treatment.

“The Department of Justice expects all employees to hold themselves to the highest standards of ethical and professional conduct,” he told the outlet. “The department takes allegations of employee misconduct seriously, including claims that employees lacked candor when dealing with investigators, and has a zero-tolerance approach to sexual harassment in the workplace.” The evidence suggests otherwise.

In Case You Missed It:  A Good Democrat: Liberal NBA Player Stephen Curry Opposes Affordable Housing Development Near His Mansion
Posted in Tyranny.

America’s security depends largely on the readiness of the U.S. military. Threats loom like a rising China, terrorism, and bad...