Rep. Mo Brooks (R-Ala.) and “dozens” of other House members are reportedly eager to sponsor an effort aimed at overturning the Electoral College vote – which, if successful, would keep President Donald Trump in the White House for another four years.

In today’s Situation Update for Dec. 31st, Trump’s plan to unleash bombshell evidence in front of Congress on January 6th, right before Congress votes on which slate of electors to accept. The full podcast is embedded below.

Because of the New Year’s Eve holiday, this update is shorter than most (just 21 minutes), but it packs in a lot of detail about what’s happening:

In addition to all that, Trump quietly extended Executive Order 13818 for one year, this executive order allows the government to bring serious charges and punishments against individuals who are engaged in human rights abuses, which includes pedophilia.

As of today, with a tweet from attorney Lin Wood, we now know that Jeffrey Epstein is alive. Epstein has all the knowledge of the pedophiles in the US Senate and in positions of governorships (as well as SCOTUS, involving Roberts). If Epstein is alive, it means Trump protected him from being killed, and it also means Trump has Epstein’s cooperation to testify against deep state pedophiles.

I am fully aware of the onslaught of attacks being made against me based on my revelations about Chief Justice John Roberts. Before attacking me, maybe fair-minded people would first ask Roberts to tell the truth.

Or ask Jeffrey Epstein. He is alive.

What if, on January 6th, Trump addresses Congress and reveals that Epstein is alive and is going to testify against all the senators and House members who are pedophiles, and that Trump is going to bring the full force of Executive Order 13818 against those who were complicit in pedophilia or the trafficking of children? That would be a game changer. We could theoretically see 100+ members of Congress resign if that information were revealed.

We don’t know whether this is the real plan, but it’s one possibility. Why did Trump extend EO 13818 for a full year if Trump were planning on leaving the White House on January 20th? Clearly, he’s not planning on leaving. He’s planning, in fact, on prosecuting the traitors.

A 2005 Commission on Federal Election Reform, put together by former President Jimmy Carter and James Baker, a former Reagan administration official, as precedent for how to deal with a fraudulent election such as this one.

Trump might also unveil evidence that shows Joe Biden is a corrupt criminal who has taken numerous bribes from China and Ukraine. He could roll out the financial records in front of Congress, declare that Biden will be arrested the following day, and remind members of Congress that if they are complicit in the criminal fraud and sedition against America, they would face arrest as well.

We don’t know exactly what’s going down on January 6th, but it’s something big. 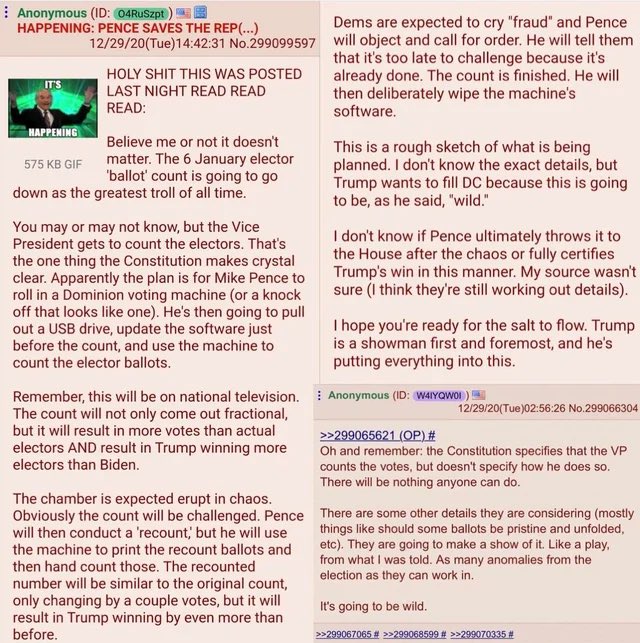 In Case You Missed It:  Can experimental mRNA vaccines act as bio-weapons and transmit coronavirus spike proteins to the unvaccinated?
Posted in Freedoms and tagged Election.

Incriminating facts emerge from a Georgia hearing the media censored

By Andrea Widburg The media kept quiet about a hearing on Wednesday before the Georgia Senate Judiciary Subcommittee on Elections.  Perhaps they...