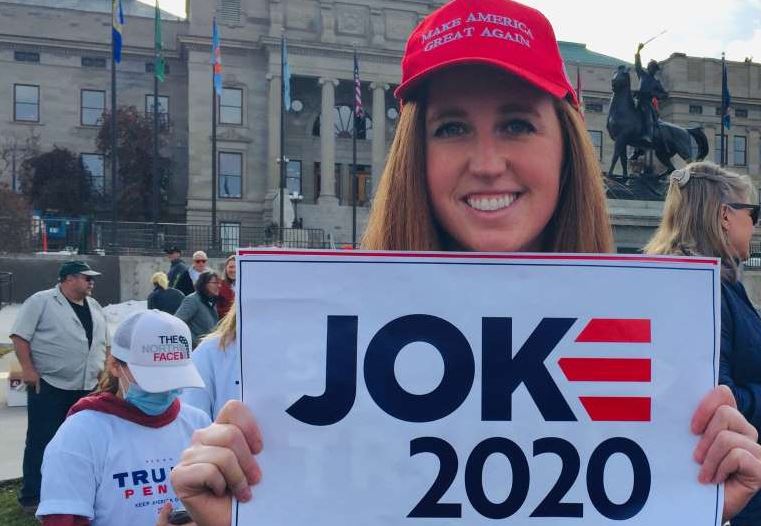 D.C. has spoken.  It is fine to burn down businesses and threaten homeowners in the name of “racial justice,” but you must never, ever question the results of a political election that takes most of a week to sort out before declaring a winner.

Black Lives Matter and Antifa are reportedly sitting on billions of dollars in donations after causing billions of dollars in property damage in this last year.  Americans who took part in “Stop the Steal” rallies at the Capitol will not find fat bank accounts awaiting them once D.C.’s wrath goes scorched earth on Trump-supporters.  And while glossy fashion mags depict Antifa revolutionaries as chic and stylish in glamorous photo spreads, Shopify and other online stores have already blacklisted MAGA revolutionaries from selling political clothing altogether.

Murder and physical battery against innocent civilians and police officers followed BLM and Antifa violence all year long; despite the terror those groups caused, the media saw nothing but “mostly peaceful protesters.”  (Mitt Romney even proudly walked in one of their parades.)  Because the halls of Congress, rather than mom-and-pop storefronts, were damaged Wednesday, these “mostly peaceful protests” will always be portrayed as the “Capitol Siege of 2021.”  (Mitt Romney will not walk in any future parades organized by Americans seeking free and fair elections.)

After the mayhem calmed down, most Republicans in Congress joined with Democrats in blaming President Trump for having unleashed a “violent mob.”  They’d now rather impeach and remove the president than understand the problem.  The hundreds of thousands of Americans in attendance may have been protesting for their voting rights, but Congress will not remember them as “civil rights protesters.”  Nobody in D.C. will turn police photographs of Wednesday’s protesters into t-shirts with the caption “good trouble.”  Only certain civil rights protests may be celebrated in gift shops.

The most amazing part of Wednesday’s chaos is that Congress learned nothing from it.  The people participating were merely part of a “mob.”  Their complaints about the 2020 election were the rantings of conspiracy theorists.  Protecting the marble blocks of the Capitol was more important than fortifying the public’s faith in the legitimacy of the country’s elections or governing institutions.

America’s constitutional republic can survive without glorious temples dedicated to the prestige of D.C.’s governing class.  America can survive if the capital were moved from the swamplands of Maryland and Virginia to the hills of Tennessee or the plains of Texas.  It won’t survive if Americans don’t have faith in the electoral process.

If there were ever a time for lawmakers in D.C. to look out their windows and marvel, “Wow, we’ve really messed up here because Americans’ faith in their government is gone,” Wednesday was the day.  The people protesting were the same people who, in the past, would have taken their children to Washington on summer vacations in order to celebrate America’s history and accomplishments.  Now those same people are so angry at the government in Washington that many would probably be fine letting the statue-topplers who have been tearing down monuments of Lincoln and Jefferson for over a year just go right ahead and dismantle the whole of D.C. while they’re at it.  When you’ve lost the American tourist class, you have a major problem.

There were so many voting irregularities during the 2020 election that any normal person would understand America’s elections are a disaster.  We spent four days watching vote-counters in battleground states suspend their counting for no good reasons (and then secretly return to counting without Republican monitors present), discover additional Biden votes seemingly out of nowhere, and accept mail-in ballots well past legal state deadlines.  Statisticians have repeatedly shown how anomalous Biden’s vote dumps (and Trump’s vote deletions) were in battleground states.  Sworn witness affidavits attesting to vote manipulation and fraud are numerous.

For me, four simple circumstantial facts always stick out: (1) Trump won well over ten million more votes than in 2016, making him the first president in nearly a century and a half to do better in re-election and still lose; (2) Trump won almost every traditional bellwether county in the country, and he did so by huge double-digit margins; (3) Trump won Iowa by eight points, Ohio by eight points, and Florida by three points, a feat that has guaranteed national victory in almost every presidential election; and (4) Biden, though barely campaigning, pulled in fifteen million more votes than Obama did in his re-election of 2012.

Without any other knowledge of vote fraud, or any physical or statistical evidence that the 2020 presidential election was manipulated, I find these circumstantial facts so strange that voters deserve to understand how they occurred.

If the answer is that mass mail-in balloting requiring no voter identification, witness verification, or signature-matching allowed millions of votes to flow into battleground states from unknown places without any credible process for authentication whatsoever, then that might explain how out of whack the 2020 election was, but it cannot excuse it.  State and federal governments can’t tell Americans that mail-in balloting, implemented with hardly any state legislative authority, fundamentally changed the way elections are won in America and expect ordinary voters on the losing side just to nod in agreement, consent, and put their trust in the system — especially after corporate news and social media giants have spent the last year intentionally deceiving Americans by (1) censoring stories damaging to Joe Biden, (2) pushing outright propaganda against President Trump, (3) suppressing pro-Trump voices, and (4) deplatforming pro-Trump publications.

Without any other evidence of fraud (of which there is plenty), the use of unaccountable mail-in balloting has permanently thrown democratic elections into doubt.

Many members of Congress responded to the events of Wednesday by arguing that respecting the decisions of the states to certify Biden’s win is instrumental to federalism — that states control their elections, and not the federal government, is undoubtedly true.  However, Americans are not so ignorant as to think out-of-state lawyers, out-of-state money, and out-of-state political operations didn’t organize and implement this radically different way of conducting state elections with the equivalent of ballot air drops for anybody to find and return.  The harm generated by 2020’s mail-in balloting occurred in the individual battleground states, but it almost certainly arose from national political organizations funded by the same big-money donors who have most of Congress on their payrolls.

For Congress to turn around and wash its hands of the whole mess by hiding behind thin defenses of federalism and claiming that what happened in Nevada, Arizona, Georgia, Wisconsin, Michigan, and Pennsylvania is for the citizens of those states to figure out is like saying that if Montanans weren’t happy with America’s policy of “mutually assured destruction” during the Cold War, they shouldn’t have housed so much of the nation’s nuclear missile stockpile.

At some point, fraud and uncertainty in one state’s election become national problems that affect voters in every state.  If Congress didn’t understand that before Wednesday, the “Capitol Siege of 2021” should have made it vividly clear.  For Congress to instead blame ordinary voters for their lack of faith in an untrustworthy system does not bode well for any American going forward.  And that grotesque failure lies almost entirely with complacent lawmakers in D.C.

In Case You Missed It:  Stanford says butchering and harvesting blood and organs from children can help adults achieve “immortality”
Posted in Freedoms and tagged Protests.

False equivalencies are being drawn between the angry pro-Trump mob that sought to disrupt democratic processes on Capitol Hill this...