The  https://www.nytimes.com/2021/01/08/us/politics/trump-impeachment-pelosi.html reported a piece of information yesterday that didn’t seem to bother them. The rest of the media ignored it. However, it is evidence that a political leader has committed an act of sedition. 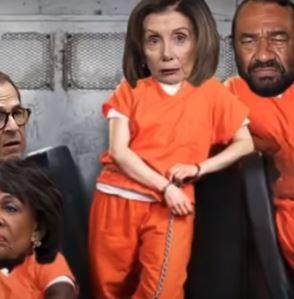 Speaker Pelosi spoke with General Milley, the chairman of the Joint Chiefs of Staff, about making certain President Trump couldn’t launch a nuke. She also suggested they remove the President with a military coup.

A spokesman for General Milley, Col. Dave Butler, confirmed that the two had spoken and said the general had “answered her questions regarding the process of nuclear command authority.”

But some Defense Department officials have privately expressed anger that political leaders seemed to be trying to get the Pentagon to do the work of Congress and Cabinet secretaries, who have legal options to remove a president.

Mr. Trump, they noted, is still the commander in chief, and unless he is removed, the military is bound to follow his lawful orders. While military officials can refuse to carry out orders they view as illegal, they cannot proactively remove the president from the chain of command. That would be a military coup, these officials said. [Emphasis mine]

That is sedition. She should be arrested. The woman is dangerous in addition to evil.

If we had a decent Attorney General, s/he would be putting together a case to try this woman for sedition.

For years we heard Trump was a traitor, and Trump supporters are seditious. Yet, all this time, it is Nancy Pelosi who is a traitor.

Kamala Harris is even telling people to bail out rioters. Those are the left-wing rioters who are trying to burn down buildings on behalf of Democrats.

How is she getting away with this? No one is reacting. Shouldn’t the DoJ immediately open up an investigation with the same swiftness with which they went after the rioters at the Capitol on Wednesay?

The newspaper spoke to other Pentagon officials who were reportedly refused to get involved in Pelosi’s coup plot, according to Times reporters David Sanger and Eric Schmitt.

“Mr. Trump, they noted, is still the commander in chief; unless he is removed, the military is bound to follow his lawful orders. While military officials can refuse to carry out orders they view as illegal — or slow the process by sending those orders for careful legal review — they cannot remove the president from the chain of command. That would amount to a military coup, the officials said,” Sanger and Schmitt reported.

Trump remains the only person in government with the capacity to directly order military action and who has the discretion to use the country’s nuclear arsenal. Any attempt to deny him the tools to carry out his duties presiding over national security would be unlawful.

The Bolsheviks at Amazon have kicked Parler off their webhosting service in an attempt to censor conservatives, the platform will...