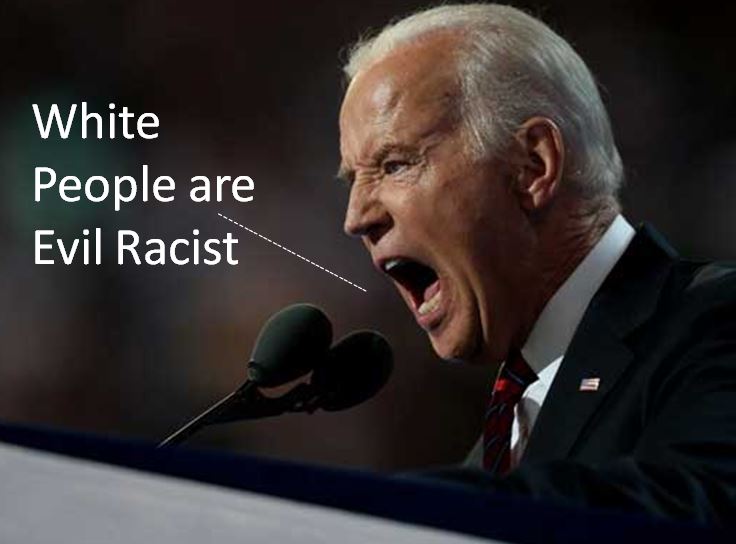 On November 7, 2020, when the two Senate seats in Georgia were headed toward a runoff that it was assumed would easily be won by Republicans, Joe Biden gave a much-ballyhooed speech, declaring:

On January 7, 2021, just one day after it was clear beyond recount margins that the Democrats had unexpectedly won both Georgia Senate seats, he immediately shifted gears.  Referring to the Capitol riot, he claimed, “No one can tell me if it had been a group of Black Lives Matter protesting yesterday, they wouldn’t have been treated very, very differently than the mob of thugs that stormed the Capitol.  We all know that’s true, and it is unacceptable.  Totally unacceptable”.

What’s telling about his ludicrous assertion (more on that below) is that his criticism isn’t directed toward the Capitol rioters.  Rather, the rioters are simply a prop for his blanket criticism of police and the systemically racist United States of Dead White Men’s Fascist Amerikkka.

No, Joe, we don’t “all know that’s true.”  You and your base think it’s true.  You want it to be true, and, using that conclusion as your starting point, you construct your entire narrative around it.  But here’s what we know is true:

These are facts, and they are undisputed.

On what basis is Biden claiming that a Capitol takeover by BLM protesters would have been handled differently?  Certainly not on any empirical evidence.  Rather, Biden is simply grabbing the baton passed to him by a long line of race-hustlers and elixir salesmen and carrying it to the next cultural hurdle, each of which seems to sink a little lower than the previous one.  Rather than stand with both Democrats and Republicans in a rare show of unity against the riot, Biden chose the repugnant stench of identity politics.

And why wouldn’t he?  It’s an electoral winner.  Georgia, a state many on the left dismiss as some holdout Klan sewer, just elected a pajama boy and Reverend Wright’s evil twin.  This in an election where Trump wasn’t on the ballot and whose personality cannot be blamed.  This election, as Georgia voters surely knew, would hand complete power to a party whose platform holds that America is fundamentally evil, black people are perpetual victims, and white people are incurably racist.

Remember the Dallas shooting in 2016?  BLM-inspired Micah Javier Johnson massacred five police officers and injured nine others who were protecting BLM protesters.  Say what you will about Barack Obama, but he was adept at reading speeches written by other people.  During his trademark head-swivel eulogy, Obama slowly and stealthily turned a beautiful tribute to the officers murdered by a black racist into a critique of…you guessed it…white racism.

And here our next Great Unifier picks up exactly where his mentor Barack Obama left off.  Whether it’s a black nationalist shooting white police officers or police officers shooting unarmed white protesters, this is all undeniable proof of “white supremacy” wracking our nation.  At least the surreptitious Obama had the tactical sense for rhetorical subterfuge.  Biden can barely speak in a coherent manner, utterly unable to convey his “thoughts” (if that’s how they can be properly described) beyond short, one-sentence bursts before his eyes glaze over into muddled chimeras about the drubbing he gave Corn Pop.

The Capitol riot had nothing to do with race, yet that’s the only prism through which the left is prepared to view it.  America is being intentionally and irreparably torn apart by racial divisions peddled by demagogues who benefit from it financially and politically.  A clear majority of voters think these demagogues should exert total control over government for the next two years.  Strap in, folks.  These waves are about to get a whole lot choppier.

In Case You Missed It:  The Radical Left Is Distorting History At The Museum Homes Of America’s Founders
Posted in Tyranny and tagged Anti-White Racism, Democrats, Racism, Usurper Joe Biden.

There Is No Constitutional Ground For Impeachment Of President Trump

Authored by Rob Natelson, op-ed via The Epoch Times, Any effort to impeach the president for comments made to Washington...