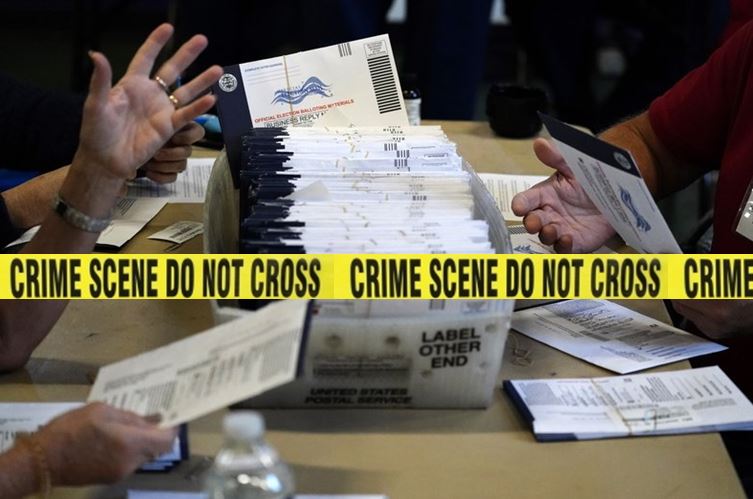 This is how democracy dies.

Despite the incredible amount of historic fraud in this year’s presidential election, the US Supreme Court on Monday announced they will not hear any cases until Joe Biden is inaugurated.

The DOJ and FBI refused to move an inch after USPS contract truck drivers reported trailers full of ballots being sent to Pennsylvania and Wisconsin.

The DOJ and FBI refused to investigate any of the incidents of proven fraud including:
** The impossible dropped votes for Joe Biden in the early morning
** The collusion of several swing states to shut down counting on election night after Trump pulled ahead in ALL of the battleground states
** The liberal counting centers LOCKING OUT GOP observers for up to TWO DAYS
** The flipping of ballots from Trump to Biden on live TV.

And the myriad of anomalies and outright fraudulent votes as Deroy Murdock reported:

It is clear the US has become a lawless state overnight.

And now Democrats are cracking down on speech and assembly rights.

What the hell is going on in our country>

Trump and the GOP had publicly pinned their legal effort to overturn the election results on the 6-3 conservative Supreme Court. “Whether it’s a justice of the Supreme Court or a number of justices of the Supreme Court, let’s see if they have the courage to do what everybody in this country knows is right,” Trump said in December, while legal advisors Jenna Ellis and Rudy Giuliani even painted a loss in Pennsylvania as a good thing because it “help[s] us in our strategy to get expeditiously to the U.S. Supreme Court.” The high court has overwhelmingly rejected the post-election legal push, however, striking down the Pennsylvania GOP case and a Texas-led lawsuit against battleground states. As the post-election cases at the heart of Monday’s orders were filed ahead of Congress’ Jan. 6 meeting to count the electoral votes—the last procedural milestone by which the results could have potentially been overturned—the Supreme Court largely ignored the last-minute rush of litigation, declining to issue orders or making an effort to expedite the cases as Republicans desired and rejecting a lawsuit from Rep. Louie Gohmert (R-Texas).

In Case You Missed It:  Lancet letter says stigmatizing unvaccinated in society "not justified"
Posted in Freedoms.

The medical community is reporting two new strains of the virus that causes COVID-19. The first variant of the novel...