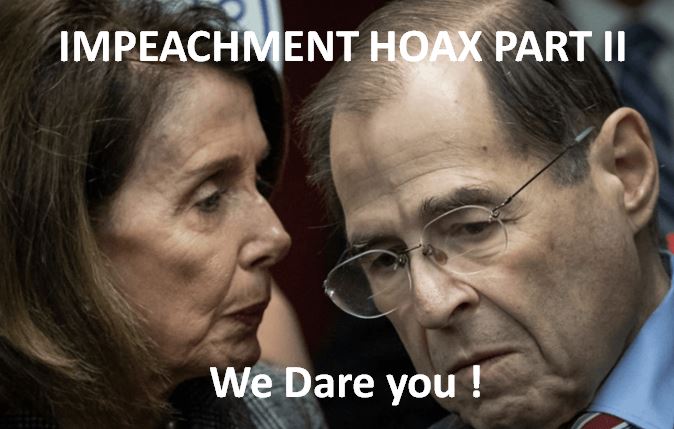 Pelosi and the unhinged leftist lunatics are again going forward on impeachment proceedings against President Trump again this week.  But if House Democrats go along and pass an article of impeachment, the process will not go as they may imagined.  Not only will a trial open up the discover process, impeachment will be a dream come true for Trump.

The alleged charge would be incitement to riot, and the president has demonstrably never called for violence in any way, the basis of the indictment can only be that Trump incited violence by repeatedly claiming that the November election was rigged and that he was the legitimate victor.  (The same claim has essentially been made already by those like Sen. Patty Murray, who have blamed Senators Hawley and Cruz for inciting the Capitol Hill riot just by objecting to the legitimacy of the electors.)

This unfortunately for the leftist lunatics means that the central issue of the trial will be the president’s claims of election fraud.  Short of reversing the election itself, such a trial would be the best thing President Trump could hope for and the worst thing for the election’s declared winners the Democrats.

The best thing going for Trump will be Discovery process.  In the law of common law jurisdictions, Discovery is a pre-trial procedure in a lawsuit in which each party, through the law of civil procedure, can obtain evidence from the other party or parties by means of discovery devices such as interrogatories, requests for production of documents, requests for admissions.  Imagine calling in the counters, the thousands of Whitleblowers ignored by the left and media, calling in  Dominion, what an opportunity for Trump to prove Biden is  a fraud!

Imagine the critical element of the president’s defense would be the exposure of all the evidence of fraud, of which there is a lot. The media so far kept from wide circulation and discussion of voter fraud, now it will be front and center and twitter will be unable to censor that.  What a dream platform for Team Giuliani.

Will Pelsoi and the Democrats fall into the trap and actually move forward on Impeachment? Let’s hope they do!

In Case You Missed It:  BUSTED: Those ‘ER doctors’ on Twitter who claimed hordes of patients were dying from COVID every day were FAKE
Posted in Freedoms and tagged Democrats, Impeachment, President Donald J Trump.

There Was No Revolution

By Pamela Geller There was no revolution. There was no pro-Trump coup attempt. Everyone knows it. A couple of crackpots who pranked...