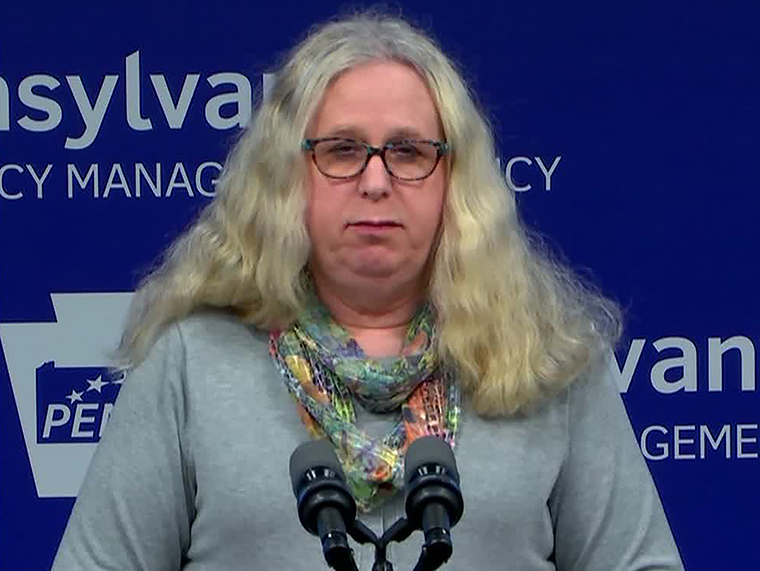 One of Biden first picks is freak show name called Rachel Levine, a man really named Richard Levine that pretends to be a woman, to serve as assistant health secretary

Democrats the party of degenerates that deny science, are not even aware that sex is determined by chromosomes.

Radical leftist Biden signed an executive order that makes the Civil Rights Act’s prohibition of discrimination on the basis of gender to include sodomites and men who have their genitals cut off (otherwise known as “transgenders”). What this essentially means is that real women — in the eyes of Biden and the rest of the hoard of degenerates within the Democrat Party — are the same as men who have their genitals removed and get their bodies pumped up with hormones. According to the Washington Post:

On his first day in office, President Biden issued a sweeping executive order making it clear that gay and transgender people are protected against discrimination in schools, health care, the workplace and other realms of American life.

The executive order outlines a broad interpretation of last year’s landmark Supreme Court ruling that gay and transgender employees are covered by Title VII of the Civil Rights Act of 1964, which prohibits discrimination “because of sex.” The Trump administration had interpreted that decision in Bostock v. Clayton County narrowly and only applying to employment.

Biden’s order calls on agencies across the federal government to review existing regulations and policies that prohibit sex discrimination, and to revise them as necessary to clarify that “sex” includes sexual orientation and gender identity.

Whats funny is that Biden’s executive order states that “People should be able to access healthcare and secure a roof over their heads without being subjected to sex discrimination.” Yes, lets hear about the droves of homeless sodomites and transgenders. The homosexuals run the music industry, and we have to hear about how much they are “suffering.” Brace yourselves for the hoards of Sodom.
One large branch of feminsts known as TERFs, or “trans-exclusionary radical feminists.” These are feminists who embrace a lot of the questionable or just plain bad ideas of feminism, but they refuse to accept “transgenders” as “women” or “men” because they believe- and correctly so -that their “acceptance” will hurt many of the goals they have worked for and as a result not help women, but rather cause a regression.

The Biden presidency, we’re told, is a historic win for women. With Kamala Harris as his Madam Vice President and a record number of women in his Cabinet, the new commander in chief is advancing the female cause. “This is what breaking the glass ceiling looks like,” Sen. Amy Klobuchar enthused on Inauguration Day.

As is often the case, the gratuitous symbolic victories distract from more significant, material losses. Hours after Harris became the first female vice president, Biden signed an executive order that discriminates against her entire sex.

The directive, titled “Preventing and Combating Discrimination on the Basis of Gender Identity or Sexual Orientation,” spells disaster for women’s shelters, sports and health care in the name of transgender equality.

For instance: Institutions that receive Title IX funding must allow biological males who identify as female to compete in women’s athletics. “Children should be able to learn without worrying about whether they will be denied access to . . . school sports,” the order states.

Some call it the “Bostock Executive Order.” All federal agencies, it dictates, must implement Supreme Court Justice Neil Gorsuch’s opinion in last year’s Bostock v. Clayton County. There, the high-court majority ruled that the 1964 Civil Rights Act’s Title VII prohibition on sexual discrimination includes discrimination on the basis of gender identity and sexual orientation. This, even though the very term “gender identity” would have befuddled those who enacted the law. (source)

the First Western Country to Rise Up Against the Lockdown is… The Netherlands!

I want to be the first to congratulate the Netherlandese on being the first country to stage a legit uprising...