This past week America has been treated to some chilly weather. Records were broken across what Rush Limbaugh described as the fruited plains.

This was Houston, Texas on February 15, 2021. Unreal. pic.twitter.com/QOSDIMikVI

Beyond America, the current Grand Solar Minimum is intensifying and so is winter, cooling the entire Northern Hemisphere.

Record cold and snow has buffeted much of the Northern Hemisphere of late: from northern Asia, to the majority of Europe, to practically ALL of North America — the NH is suffering a truly historic winter of 2020/21 as the Grand Solar Minimum intensifies.

I could go on, but you get the picture. It was a heckuva cold weekend.

It’s so cold in Texas homes that fish tanks are frozen. pic.twitter.com/IRuDjpG5Af

At one time, extreme weather was blamed on global warming, but who could, with a straight face, attribute record setting cold temperatures to a warming planet? Conveniently the narrative changed a few years ago, just like the First Amendment also conveniently changed.

Last summer, riots and protests were peaceful assembly, and in early January, peaceful assembly changed to insurrection. Warming can be cooling and vice versa, under fluid definitions that change based on political circumstances.

Aside from Mother Nature, NASA is also raining on the global warming parade. Agency scientist Martin Mlynczak notes that sunspot activity on the surface of the sun has dropped so low that our outer atmosphere is losing heat energy, and that “If trends continue, it could soon set a Space Age record for cold.”

This is how cold it is at my Apartment.

As a Texan, yes, I'm certainly not built for this. I don't even care. pic.twitter.com/FMt8imglJp

The scientist was quick to point out that, “there was no relationship between temperatures in space and that on earth.” Perhaps, or perhaps not. Scientists from the WHO also told us in January 2020 that there was “no clear evidence of human-to-human transmission of the novel coronavirus.” Dr Anthony Fauci last March told us “there’s no reason to be walking around with a mask.”

Welcome to science – educated guesses based on the best knowledge at the time, hopefully without influence from politics or popular culture.

Oh, you know just your normal snow on the beach in Galveston, Texas. pic.twitter.com/wm9z8gZ1po

Carbon dioxide, despite representing only 0.04 percent of the atmosphere, is believed to contribute to global warming. What’s not clear is whether rising CO2 levels are a cause or effect of rising temperatures. Perhaps other factors warm the planet, and a warmer ocean is releasing CO2 into the atmosphere, bubbling out of the water, and may be associated with warmer temperatures, but as an effect rather than the cause.

Water stored in the bathtub froze solid last night. That's how it's going in Dallas. pic.twitter.com/cJdUMDT6pN

Solar activity influences temperatures on Earth. One example is the “Maunder Minimum”, between 1645 and 1715 when sunspots were virtually nonexistent and the planet experienced a “Little Ice Age.” During the 12th and 13th centuries, solar activity was high, and Europe enjoyed a mild climate.

The climate changes; that’s not a revelation. From CBS News, “55 million years ago the Arctic was once a lot like Miami, with an average temperature of 74 degrees, alligator ancestors and palm trees.” This was long before airplanes and SUVs. If fact it was long before humans existed, with homo sapiens only 200,000 to 300,000 years old.

Previous ice ages came and went, millions of years ago, through naturally occurring cooling and warming cycles. Far more recently, only 20,000 years ago, mile thick ice covered most of Canada and the northern contiguous United States, but the climate warmed and the ice melted, without help from Al Gore or Greta.

Stateline Ave this morning in Texarkana at the same location as yesterday afternoon. Both the TX and AR sides are snow covered this morning. @weatherchannel @mikeseidel #WinterStormViola #TXwx #arwx pic.twitter.com/OKiONKAbAa

“CO2 fertilization” led to an 11 percent increase in foliage cover from 1982 to 2010 across many arid regions of the world. Advocates for the poor and disenfranchised should be cheering any warming as cooling would lead to global starvation and misery. 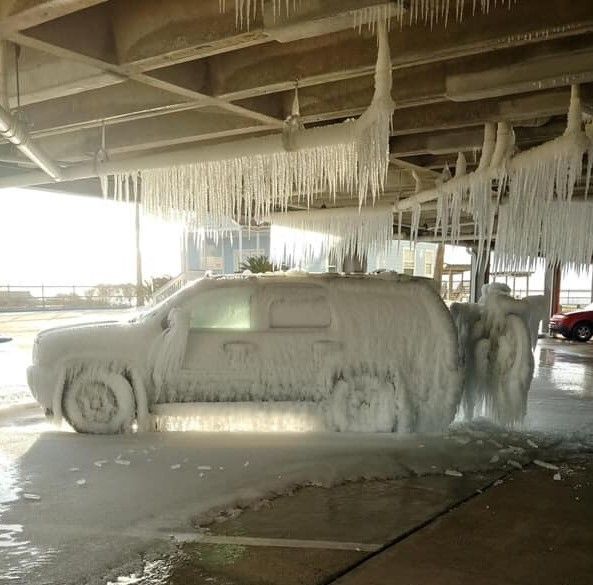 Given that the Earth is 4.5 billion years old, and in the space of 50 years, we have gone from global cooling alarmism in the 1970s to the global warming warnings of the past decade, it seems we are a bit presumptuous assuming present observations are relevant in the far longer scheme of global climate and temperatures.

According to the Intergovernmental Panel on Climate Change, “The climate system is a coupled non-linear chaotic system, and therefore the long-term prediction of future climate states is not possible.” Meaning we can predict the week’s weather, but not the climate decades or centuries into the future.

Yet the media and ruling classes are pushing a narrative, exemplified by this headline from National Geographic, “Why cold weather doesn’t mean climate change is fake.” Neither does warm weather, hurricanes, or tornados. The climate has and always will be changing.

Don’t walk on the highway. It is too dangerous. Drivers could lose control and hit you. #ATXtraffic #txdotwx pic.twitter.com/3XDSWCd0XM

Instead of tapdancing in order to lump frigid temperatures with man-made global warming, there should be a discussion of the geopolitical ramifications of America’s energy policy. Despite the desire of the current administration to “go green,” practicalities make this a nonstarter.

Ask Germany. Its millions of solar panels are covered in ice and are useless, as are its 30,000 wind turbines, frozen and not generating any electricity. Germany may these days be longing for coal or nuclear-powered plants providing electricity, on demand, regardless of the weather outside.

Ice storms in Texas froze half the wind generating capacity, knocking out power and sending electricity prices through the roof. Wind accounts for 23 percent of Texas electricity. Suppose under Biden that figure jumps to 75 or 90 percent?

My sister’s pool in Dallas is completely frozen over! pic.twitter.com/PEsZJQxSHB

4 million Texans lost power during this recent freeze, a time when they needed it the most. How many Texans died due to Green New Deal power sources being frozen shut?

As a delicious irony, helicopters are being used to deice frozen wind turbine blades, using about 100 times as much energy to deice compared to energy saved from using the windmills for power. Not such a green new deal.

If President Biden makes good on his promise to “end fossil fuel,” leaving us dependent on hostile foreign countries and weather dependent alternative “green” sources for our energy needs, along with the current lowest solar activity in over 200 years, we may be in for a long cold winter. Biden wasn’t kidding when he warned of a “dark winter.” Bundle up.

School board members in Oakley, CA were caught mocking and trashing parents who desperately want their children back in the...