Thanks to some on r/WallStreetBets (WSB) and others on social media, the wider public is starting to grasp the corruption and cronyism in the financial markets including in the paper gold and paper silver markets.

The silver bullion market is one of the most manipulated on earth. After WSB ‘Reddit-Raiders’ sent GameStop shares sky-high earlier this month, some on the forum attempted to squeeze banks that are manipulating silver markets. 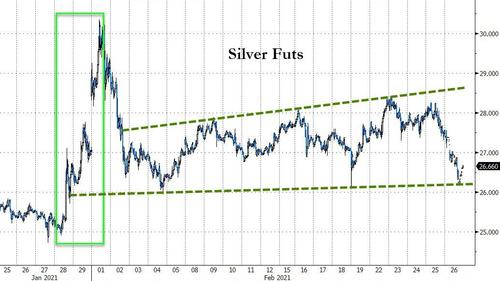 Judging by the unprecedented flows into the Silver ETF (SLV) weeks ago, almost double the previous record inflow for this 15-year-old ETF, the awareness only continues to grow. 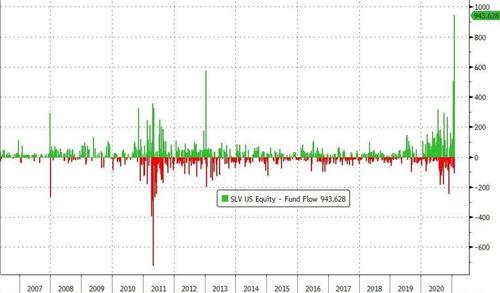 Despite the dismal squeeze on the paper markets, there was an “unprecedented” grab for physical silver, according to BullionStar.com.

Just as Redditors bought billboards in Times Square and across the country, urging people to buy GameStop – it appears someone and a whole lot of donors is raising money to fund “Silver Squeeze” billboards.

On popular crowdfunding platform “GoFundMe,” someone named Ivan Bayoukhi created a campaign to raise money to fund billboards for the awareness of “Silver Squeeze.”

Here’s what the description of the “Silver Squeeze” GoFundMe campaign says:

Silver movement will be Epic..

Couple of months or years down the lane and people will look back and say how this whole thing started..some 20000 like-minded guys, got tired of manipulation and started doing something that banks had no defense for..buy physical!! We chose to play the game on our turf and theirs.

Its matter of days or months when this community gets to million+ and imagine the horsepower when all these guys start buying..

Average people banning together in a collective manner against Wall Street hedge funds are epic – can almost describe these folks as ‘decentralized hedge funds’ of the people for the people waging war on big bankers.

Donors of the “Silver Squeeze” commented as saying:

“Slv options are gonna pop!!,” Tom Johnsohn Hiscock who donated $50 to the cause.

“A very very effective location for you would be the Trans Canada Highway between Calgary and Banff!! 33,000 vehicles per day average. There is a row of billboards there,” said donor Jeremy Tufts.

“[email protected] JPM,” donor ian farmer who gave $20 to the cause.

With another round of stimulus checks coming down the pipe – the question is what will people buy – more GameStop, other ‘meme stonks,’ long volatility ETFs, physical silver, and or SLV.

GoFundMe page can be found at:
https://www.gofundme.com/f/silver-squeeze

Posted in Financial and tagged Financial.

NY Democrat State Officials Call for Gov. Cuomo to Resign Over Inappropriate Comments, But Not For Killing Seniors

At least two Democrat state legislatures called for New York Governor Andrew Cuomo to resign on Saturday over a second...