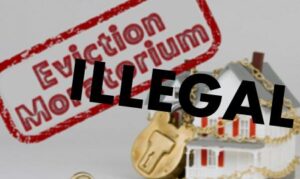 I concur with Phil Klein that President Biden has violated his oath of office by reinstating the eviction moratorium. It is important to spell out why.

As I’ve detailed over the past several weeks (see here and follow the links), there has been no shortage of litigation over the moratorium — which is better understood as a series of moratoria, started by the Trump administration and sustained by the Biden administration in executive actions, the last of which — prior to Biden’s lawless fiat yesterday — lapsed on July 31.

The challenges fell into two categories. First is the constitutional claim that the federal government lacks the constitutional authority to order a deferral of payments that arise out of intrastate rental arrangements. Second is what’s usually referred to as the statutory claim that, even if Washington theoretically has such constitutional power, Congress did not exercise it in the relevant statute and regulation, such that the CDC is wrong when it claims to be acting under that authority.

This can be confusing because the so-called statutory claim is, derivatively, a constitutional claim.

If Congress has not granted the executive branch the authority that the executive claims to be exercising, then the executive is, in effect, legislating. This is a constitutional offense: Under separation-of-powers principles, the president has no power to legislate. Still, at least initially, we think of this merely as a statutory claim, rather than a constitutional affront, because we presume the president and his administration are acting in good faith. That is, in defending the CDC’s action, the Justice Department was interpreting the relevant statute in a manner that seemed tenable, even if the courts might later determine that it was untenable. This is not an uncommon situation, and we typically give the executive branch the benefit of the doubt that it is simply misconstruing the controlling statute, not willfully usurping Congress’s Article I power to make law.

Why is it important to be clear on this?

For starters, what has been referred to as the constitutional claim is highly debatable. It is based on an originalist interpretation of the Commerce Clause that I believe is correct but that has been undermined by the Supreme Court’s Commerce Clause jurisprudence.

The vast majority of rental agreements are intrastate; the Constitution empowers Congress to regulate only interstate commerce, leaving intrastate financial transactions to state oversight. Therefore, in terms of the Commerce Clause as originally understood, the flaw here is not merely that the CDC lacks authority to intrude on rental agreements; it is that the federal government has no such power.

Alas, the Supreme Court, particularly since the New Deal, has eroded the Commerce Clause, effectively granting Congress extensive authority to regulate intrastate arrangements that have some (often barely) discernible impact on interstate commerce. Although a Trump-appointed district judge in Texas was persuaded by this constitutional argument in invalidating the moratorium earlier this year, it is anything but clear that his ruling would have been upheld by the higher courts. Even if Supreme Court precedents are wrong, lower court judges must follow them. Only the Supreme Court itself may reverse them.

At the moment, when we assert that Biden is violating the Constitution, the Commerce Clause is not principally what we’re talking about (although I would not concede this point).

Mining controlling law and regulations, the government’s statutory claim was that Congress has delegated to the Department of Health and Human Services (which, in turn, assigns it to the CDC, an HHS component) the authority to “take such measures to prevent” the spread of communicable diseases as the CDC “deems reasonably necessary” (42 C.F.R. §70.02). As a number of courts found, this extravagant rendering omits salient textual limitations.

To begin with, it flows from a statutory mandate (42 U.S.C. §264) that speaks of preventing the spread of disease by:

inspection, fumigation, disinfection, sanitation, pest extermination, destruction of animals or articles found to be so infected or contaminated as to be sources of dangerous infection to human beings, and other measures, as in his judgment may be necessary. [Emphasis added.]

Obviously, the power delegated to the CDC is not, as the Biden administration would have it, limitless. In empowering the CDC to employ measures it judges to be “necessary,” the law is talking about measures along the lines of fumigation or destruction of animals and physical objects that may be the source of infectious disease.

If that were not sufficiently clear from the statute, it is further elucidated by the regulation itself (section 70.02). Inconvenient though it is for the administration, the regulation does not just say that the CDC is authorized to take measures it “deems reasonably necessary”; the sentence continues: “including inspection, fumigation, disinfection, sanitation, pest extermination, and destruction of animals or articles believed to be sources of infection.”

Hypothetically then, if the CDC promulgated special rules of disposal for some dangerous physical item that might be a source of infection, that would be a reasonable exercise of the authority granted by Congress to take action deemed necessary to halt the spread of disease. On the other hand, the moratorium — prohibiting an owner from evicting due to the tenant’s failure to pay rent — is far afield from the power Congress has delegated to the CDC. Clearly, it is not a real health regulation; it is a progressive gambit to infringe on financial transactions, under the pretense of safeguarding against the spread of COVID-19.

Nevertheless, we can grant that the Justice Department, at first, was taking an aggressive legal position, not acting in bad faith. We can freely concede that there is vague language in the law that empowers the CDC to do more than fumigate, etc. Reasonable minds can differ over how far that vague language may be pushed to legitimize other actions. To be wrong about such a thing is not, per se, to threaten our constitutional order. It is simply to misconstrue statutes and regulations.

At a certain point, however, what may start out as good faith can become bad faith. In our system, that happens when the courts have ruled on a matter where the Constitution vests in the judiciary the authority to say what the law is.

The eviction moratorium is such a matter. After a number of federal courts ruled against the Biden administration’s interpretation of statutory and regulatory provisions, the administration continued to press its case in the Supreme Court. There, four justices were ready to invalidate the moratorium outright; a fifth, Justice Kavanaugh, acknowledged the basic correctness of those justices’ position but decided that immediate invalidation would be overkill given that the moratorium was due to lapse in five weeks. Kavanaugh was clear, though: (a) if the moratorium were not on the cusp of expiring, he would have invalidated it, and (b) “clear and specific congressional authorization (via new legislation) would be necessary” if the moratorium were to be extended.

Consequently, by unilaterally decreeing a moratorium extension in the teeth of that ruling, President Biden is acting in bad faith. It is now a constitutional offense. Specifically, and in blatant violation of his solemn duty to execute the laws faithfully, Biden has usurped Congress’s legislative authority and declared the power to legislate. He is running roughshod over the separation of powers, which is the foundation of our constitutional framework, limiting power and preserving liberty.

That is why this is a constitutional violation, one even more profound than a theorized violation stemming from the Commerce Clause — since Biden has been admonished by the Supreme Court that what he is now doing would be wrong. Moreover, the administration publicly conceded on Monday that there was no “legal authority for even new, targeted eviction moratoriums.”

There is also no doubt that Democrats, who twice impeached President Trump for abusing his office, would be calling for the impeachment of a Republican president who did such a thing.

In Case You Missed It:  If You Are Vaccinated and You Fear the Un-Vaccinated, You Might Be a Moron
Posted in Freedoms and tagged Usurper Joe Biden.

Over the target– The fake news specialists at The Daily Beast published a slanderous hit piece on The Gateway Pundit,...