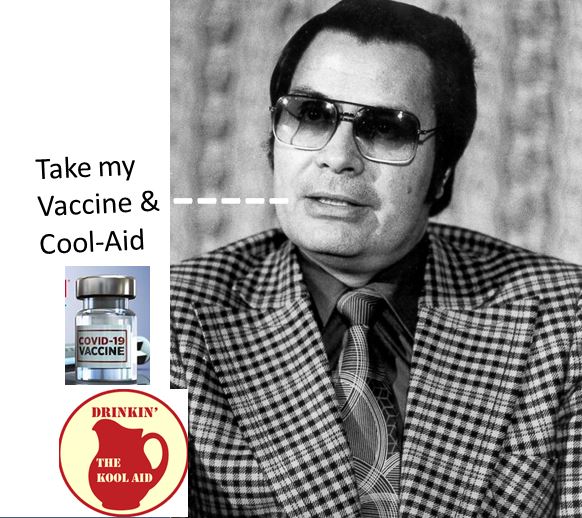 Ok, full disclosure: I’m one of “those people”, the unwashed aka the unvaccinated.  Why?  Well so far it’s still a free country so I don’t have to take responsibility for the health of a nation or treat my decision as a moral choice, my body, my decision.

I’ve been vaccine-ambiguous from the start.  My research on an American Thinker article, America Held Hostage showed people weren’t/aren’t dropping like flies, bodies didn’t/don’t litter the streets, and hospitals weren’t/aren’t overwhelmed with COVID patients.  And our kids face nearly-zero danger from the virus.

So why in America would we tie our freedom, our right to be ‘together’ to a vaccine?

Thus after seeing the facts, I felt no urgency to take a vaccine because a 99% rate of survival doesn’t call for extreme (experimental) actions.

I went from vaccine-ambiguous to vaccine-hesitant early on when some states began to offer  to take the vaccine, free doughnuts, hamburgers, savings bonds, liquor even free marijuana.

So why would governments bribe people to take a shot that’s good for them?  Hmmm.

My radar flashes orange when television ads start popping up that promise we can see our family again, be with friends again if we just take the shot…

So why in America would we tie our freedom, our right to be ‘together’ to a vaccine?  Hmmm.

Then it gets downright scary when Biden launches an “effort” with “government officials knocking on the doors of the unvaccinated” to ‘persuade’ them to get their COVID shot.

Now our rulers are tired of asking nice.  They move on to what I like to call the Jonestown Approach

And the feds know who’s unvaccinated and where they live how?  Hmmm

Despite the push, much of the country still says no thank you to the vaccine.  Now our rulers are tired of asking nice.  They move on to what I like to call the Jonestown Approach.

Jim Jones: was a cult leader in Jonestown, Guyana, site of the largest mass suicide in modern history, leaving over 900 dead.  The world was stunned.  How did people get to the point where they’d kill themselves, kill their children because a man ordered it?

Sadly, those who drank the poison had already surrendered their lives, their free will to Jones long before his final order.  Jones had gained control over his flock using psyops, punishment, fear, and isolation

He used mind control, gaslighting to blur the relationship between words and reality by making his followers “give him daily thanks for good food and work” while they were “starving and working six and a half days a week.”

He ‘punished’ his people with solitary confinement in a “three-foot-high punishment box” or by forcing them to work on a “chain gang in the tropical sun”.

He isolated his members from their families so when they were  beaten or humiliated before the entire community, “they had nowhere to turn, for support”.

He stoked fear saying “the jungles were full of mercenaries who wanted to kill them if they left Jonestown”.  Full of “tigers and snakes. . that would eat them alive.”

Today in America, the globalist cabal like Jim Jones, is using psyops, punishment, fear, and isolation to gain control of American citizens

Today in America, the globalist cabal like Jim Jones, is using psyops, punishment, fear, and isolation to gain control of American citizens.

They paint the pandemic as an uncontrolled killer virus with no cure.  They falsely report that  effective therapeutics proven safe are dangerous.  They label the unvaccinated “killers”, call for loyal followers to shun, punish the unvaccinated.

They imply the elderly will likely die if exposed to COVID though for those over 70 years the survival rate is 95%.  They tell their followers the entire country is put at risk by the unvaccinated and people will die.

They isolate people who resist, ban them from social media, attack their business, label them domestic terrorists.

Many members of the  People’s Temple succumbed to these cult practices  They gave up their property, their families and friends.  They relinquished control over what they did, where they lived, how they spoke.

Similarly Americans are surrendering their individual freedom to the deep state cult.  The lockdowns control where we go, restrictions on gatherings dictate who we can see, censorship controls what we can say.  We’re made to wear masks that don’t prevent the virus to display our fear, our compliance.  And now this government cult leader is trying to force injections on all.   Like Jonestown, this ruling elite see the American people as their property, their disciples to be dealt with as they see fit.

Today the globalist cabal is forcing people to take their shot

So where does this all end?  Well, for the people of Jonestown, it ended on November 18, 1978  when Jim Jones unilaterally decided his people would die.  To ensure his mission succeeded, , Jones targeted children and babies first.  He believed if he “killed the children first, then the parents wouldn’t have any reason to live”.

“With armed guards encircling everyone and with children bawling and screaming, medical staff members with syringes squirted poison down the throats of little kids.”

But surely I’m not trying to compare a murder/suicide to a vaccine.  No,  but I will compare Jones’s suicide mandate to virus-related mandates, to vaccine mandates.  A mandate is a compulsory order, people must comply, no choice.

With Jim Jones’s suicide mandate, people complied either willingly or by force.  Those who refused to drink were either held down and forcibly injected with the poison or shot.

Today the globalist cabal is forcing people to take their shot.  As with Jonestown, believers have already taken their shot(s).  The rest of us are told to get in line and do the same.  No we’re not held down and injected [yet].  But like Jonestown, those who refuse the injection are forced to comply.

“Force: [To] make someone do something difficult, unpleasant, or unusual, especially by threatening or not offering the possibility of choice”

Thus corporations, health facilities, and government agencies that enforce the no jab no job mandate are forcing people to take the vaccine .  Few if any can afford to lose their job and health insurance so they have no choice

Or a person needs to travel for a critical business meeting that could also mean their job or they’re going to a family funeral or wedding but can’t fly without the vaccine, forced to take the jab or stay in travel lockdown.

The similarities are terrifying but unlike Jonestown we’re not surrounded by armed guards [yet].  It’s not too late for us to fight, to resist

And for God’s sake, America RESIST!   No school board member, corporate boss, mayor, governor, judge, congressman, or even President has the right to force an American citizen to take an injection, to put something in their body they don’t want..

Resist now America before, like the victims in Jonestown, we find it’s too late to resist, too late to fight back.

“Yet, however weak our country may be, I hope we shall never sacrifice our liberties. If, therefore, on a full and candid discussion, the proposed system shall appear to have that tendency, for God’s sake, let us reject it!” – Alexander Hamilton, Speech on the Compromises of the Constitution 1788

Pentagon: Out of 6,000 Evacuees in the Last 24 Hours Only “A Couple Hundred” Are American Citizens (VIDEO)

US Army Major General Hank Taylor The Pentagon on Friday briefed reporters on the Biden Admin’s failure to safely evacuate...