The “Vaccine” will kill 117 kids to save one kid from catching COVID. 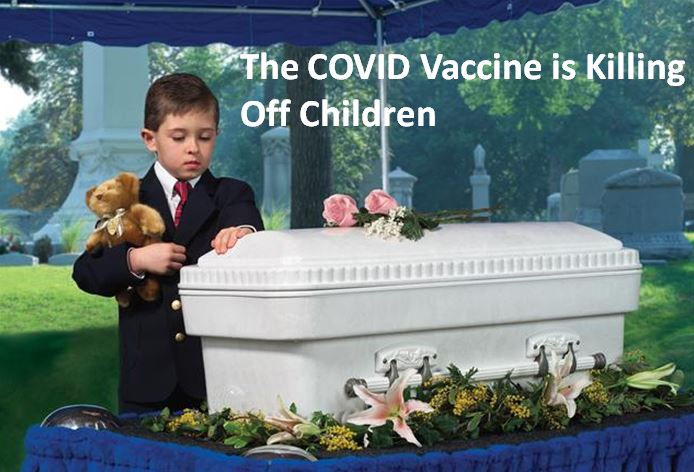 “So, to put it simply, the Biden administration plan would kill 5,248 children via Pfizer mRNA shots in order to save 45 children from dying of coronavirus. For every one child saved by the shot, another 117 would be killed by the shot.”

The Vaccine kill 117 kids to save one kid from COVID.

This was not surprising to me.

What Dr. Toby Rogers did in his study was super simple. He estimated the number of kids likely to die from COVID and assumed the shots would be 80% protective of all those deaths. He extrapolated the death rate from the vaccine from the 12-24 death data in VAERS using a conservative 41 under-reporting factor. It’s no more complicated than that. No rocket science required.

Dr. Roger’s results are consistent with the scientific peer-reviewed literature such as the Kostoff paper which concluded:

In plain English, people in the 65+ demographic are five times as likely to die from the inoculation as from COVID-19 under the most favorable assumptions! This demographic is the most vulnerable to adverse effects from COVID-19. As the age demographics go below about 35 years old, the chances of death from COVID-19 become very small, and when they go below 18, become negligible.

The Walach paper found the same thing. It has now been re-published in Science, Public Health Policy and the Law which is a peer-reviewed medical journal. The Walach paper appears in this issue along with a scathing editorial by the journal editor talking about how the paper authors were mistreated by the scientific community. James Lyons-Weiler wrote, “Either way, the authors of the latest paper in Science, Public Health Policy, & the Law (Walach et al.) have been caught, like grist in the mill, in a nonsensical, convoluted torture session in which their detractors have broken all logic and reason on the question of how society renders causal inference between vaccine exposure and serious illness or death.” James would love to debate anyone who disagrees with his editorial, but nobody wants to talk about it.

They don’t really care how many kids they kill from the vaccines. It just doesn’t matter. Their sole focus is on saving kids from dying from COVID, regardless of how many kids have to be killed from the drug. All-cause mortality is ignored entirely even though Pfizer’s own study showed 4X the deaths from cardiac arrest in the group that got the drug.

Even though there were 20 deaths in the group that got the vaccine vs. 14 deaths in the group that got the placebo, they can simply write that off as “not statistically significant.” In other words, the data does show that the drug does kill more people than it saves, but the study was never powered to measure that. So they can say “nobody knows” as long as they can keep fooling everyone to believe that the VAERS data is unreliable (which it isn’t which I address in detail here).

Over 22,000 people have read Toby’s analysis and nobody came up with a better estimate or a material error in his analysis. There were nothing but compliments on the quality of the analysis. In particular, nobody from the CDC or FDA pointed out any errors.

On September 24, 2021, Toby posted this reasonable request on Twitter:

He did get a response, but not to the question he asked. He wrote, “Pharma sent a swarm of trolls in to attack me and Pharma goons published hits pieces on me outside of Twitter to punish me for even asking the question. Of course none of the Pharma trolls provided an estimate of the NNTV for COVID-19 shots. That tells us that we are exactly over the target.”

Since nobody, not even the trolls, responded with data, he started looking into it himself.

Next, he wrote a series of articles on what he found; the risk-benefit analysis for the current COVID vaccines. In particular, he examined the case for the 5 to 11 year cohort which was just approved by the FDA.

I like Toby because he doesn’t pull any punches when he writes. He calls a spade a spade. Here are a few “highlights” from his recent articles that I think everyone should know:

There is more, but you get the idea, right?

But the dose for the kids is 1/3 the adult dose… doesn’t that reduce the risk?

If they admitted that the benefits may scale down with the dose, then the risks are likely to scale down as well.

Note that there were no benefits demonstrated in the 5 to 11 trial because it was too small to show that. So the benefits are really completely unknown. We have to extrapolate from the older age groups.

It’s not a compelling case to inject our kids

Solonsax wrote me on Gab the following questions with respect to the 5 to 11 cohort which I was unable to answer because there is no data that I’m aware of. Perhaps someone else can? (good luck)

How will one child be saved by the jab? Please explain.

1) The injection does not confer antibody immunity to the COVID-19 virus (SARS-CoV-2); it promotes antibodies to the ‘synthetic spike protein’; that spike protein is not specific to the SARS-CoV-2 virus

3) The injection does not reduce hospitalizations or deaths

4) The injection does not reduce severe symptoms

5) The injection does not prevent the carrying of the pathogen

So are these injections vaccines?

The conclusion therefore is NO. This injection for COVID-19 is NOT a vaccine (the vaccines do not stop infection, transmission, severe COVID, hospitalization, or death); it is best described as a gene manipulating platform. The mRNA shots has had disastrous results on laboratory test-animals for decades. Injecting RNA into the body to force the body to make SARS-CoV spike proteins, is itself very harmful. When our immune system detects the presence of the SARS-CoV spike protein, it attacks it with antibodies and lymphocytes. This causes cell death and other complications. Worse, the spike protein itself is toxic to cells. Among other things, it can cause bleeding and clotting throughout the body. In a very ugly twist, the spike protein is engineered in such a way that it especially attacks the testes and ovaries, potentially causing hormonal irregularities and sterility. The jab is very dangerous in multiple ways and in no way should it be considered a vaccine.

Nobody wants to know the NNTV?!?

It is amazing that there is no NNTV analysis from the FDA or CDC isn’t it? And isn’t it surprising that nobody in the mainstream media is asking for it?

Nobody in the mainstream medical community wants to see the NNTV analysis (and the associated risks) either! Do you see Eric Topol asking any questions? Monica Gandhi? Sanjay Gupta? Of course not!! Don’t be silly. That is never going to happen.

Even worse than that is that nobody on either the VRBPAC or ACIP committees wants to know the NNTV and see the risk-benefit analysis using the proper URF and the VAERS excess mortality analysis. So if you were ever on the fence on whether the system is rigged by the drug companies, you have your answer. The oversight committee members aren’t critical thinkers. None of them. I tried emailing all the members many times. NOBODY would engage in the data we found about VAERS (and we have the top VAERS experts in the world on our team).

Nobody in Congress will ask about it either. They never hold these people accountable. They trust them. Completely. Except maybe Senator Johnson and Senator Rand Paul who have been the only ones asking questions. Sadly, nobody else cares about how many people we kill with these “vaccines.” Seriously. Call your congressperson. You will never be able to ask them about it.

I’ve tried to get 5 seconds with my member of Congress, Anna Eshoo to talk about the issue of vaccine safety and all cause mortality caused by the vaccines, but she doesn’t want to hear about it and blows me off every time. Won’t take a meeting. Won’t answer any questions. Her staff no longer responds to any emails I write. They won’t tell me how our analysis is wrong. Their attitude is that it must be wrong because the CDC is never wrong. They won’t even read what you wrote.

Nobody will debate us on this analysis, even though it’s the only one out there

If anyone qualified wants to do a public recorded debate with Toby and our team on this, we’ll happily do this so we can resolve any issues ASAP. But nobody is going to want to do this. You won’t find anyone in the comments below saying, “let’s debate it.” That’s just not going to happen and that pretty much tells you who is on the winning side of this argument.

And the people who think the vaccine is safe cannot argue that they don’t have the time to do this because: 1) they want to stop misinformation and 2) this is the only qualified guy to have done the risk-benefit analysis so it’s not like there are hundreds of these. This is the only one!

They all say they want to stop misinformation. Fine. All they have to do is agree to a recorded scientific discussion where they can explain to us how we got it wrong and answer our questions and show us the correct answer. They will not do that. They will ignore and censor us to avoid being put in a situation where they will have to answer any pesky questions from people who know what is going on.

For example, see this analysis.

Archbishop Vigano is the object of evil attacks by the mainstream media because he is a polar star of hope...