Over the weekend, it was reported that the alleged triple vaccine jabbed and boosted 95-year-old Queen Elizabeth II or England had tested positive for COVID-19.

After over a year of ridicule and leftist social media sites removing any mention of Ivermectin as COVID treatment, today we got to see what the elites like Queen Elizabeth take then they get COVID-19. The University of Oxford is testing whether giving people with Covid-19 ivermectin prevents them ending up in hospital. 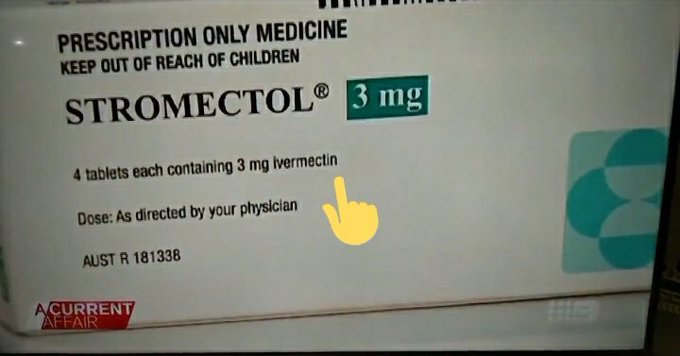 Current Affair put out an update on the Queen’s condition and treatments, while briefly interviewing her doctor.  At the 00.19 mark is the most shocking when they show her treatment is Stromectol a brand name for Ivermectin.  Also known as Horse de-wormer by the leftist media,

Joe Rogan recently became a new subject recently for calling out those in the media who attacked him for taking the drug Ivermectin a safe drug with a  long term history was branded horse de-warmer by the leftist manics.

Hospitals are refusing this treatment to COVID patients, many who families had to sue in court demanding their loved one be treated with it. Many were refused this treatment and later died.

Watch and see Queen Elizabeth an elite with Deep State ties is being treated with Stromectol, something they do not want you taking.

Studies in India have so far shown that Ivermectin works.

Studies have found that patients with Covid-19 treated in hospital who “received ivermectin early reported substantial recovery” and that there was “a substantial improvement and reduction in mortality rate in ivermectin treated groups” by 90%.

The Elgazzar study was one of the the largest and most promising showing the drug may help Covid patients, and has often been cited by proponents of the drug as evidence of its effectiveness.

CNN hit pieces on the Queen for taking "horse dewormer" when? https://t.co/xaDxoh2FO7

In Case You Missed It:  Crypto CONTAGION spreads as Ponzi-like elements of the crypto ecosystem start unwinding uncontrollably
Posted in Freedoms and tagged COVID.

EXCLUSIVE: After 25 Deaths, $1-$2 Billion in Damages, and Over 2,000 Policemen and Policewomen Injured, US Companies Have Contributed or Promised Nearly $1 Billion to BLM and/or Social Justice Groups