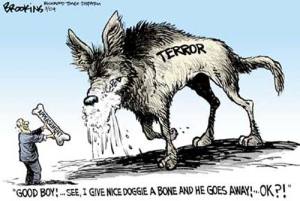 Non-discrimination has become favoritism for Islam

By A. Dru Kristenev   Buffaloed by the age-old fear tactic, progressives seeking equality in an unequal world keep trying to tilt the playing field toward opponents armed with grenades and mortars. The result is anything but equality or non-discrimination, it is appeasement that has transformed into favoritism. No other religion except Islam compels conversion using […]

The Dutch government refuses to apologize for the apathetic and detached attitude of the Dutch government in exile in London toward the more than 100 000 persecuted, deported and murdered Dutch Jews during the second World War. Queen Wilhelmina and her government found no time to protest or condemn what was happening in Holland under Nazi […]

Gaza today is a middle class society being portrayed by the flotilla, and BDS crowd, as one of the greatest humanitarian disasters on earth. The 2011 flotilla is sailing just days after Gaza City opened its second super shopping mall replete with a wide range of goods, mostly supplied by Israel. By the way, most […]

The Religion of Rape… All Norwegian Rapists in 2010 Were Muslim

Every single rapist in Norway in 2010 was Muslim. A fluke? The report was cited by an official Norwegian television station, which interviewed a victim who said that her rapist explained to her that his religion permits him to rape her. According to the police report there was a total of 186 of known rape […]

Dennis Kucinich easily one of the top 10 Islamapologists in the Obama Administration outlining the stamp of approval for Islam, even radical Islam, at the highest levels of the Executive Branch. Islamapologetics has become the latest fad within the Left’s agenda of cultural Marxism. Now, “Free Gaza” mouthpiece, Dennis Kucinich hops on board the Left’s […]

Suicide Bomber Hits Moscow Airport, 31 dead, Islamist insurgency cited… In the UK, Baroness Warsi, better known as PM Cameron’s pet Muslim, delivered a speech lambasting Britons as racists for in any way associating terrorism with Islam. If you have been guilty of trying to distinguish between moderate and radical Muslims, that too is now […]

If the Chilean Mine Had Been in Colorado, Under Obama

D.K. McGann– Watching with moist eye the rescue of the thirty-three miners from the collapsed San Jose mine in Copiopo, Chile I found myself inspired by the sense of purpose and pride displayed by the actors in this all too real life drama. The unbending commitment of each and every Chilean and foreign national involved […]

by Reut Cohen FrontPage Magazine May 21, 2010 [Ed. note: publisher’s title is “Apologist for Gender Apartheid.”] On May 7, 2010, UCLA’s Center for Near Eastern Studies (CNES) and the Journal of Middle East Women’s Studies co-sponsored the lecture, “Rethinking Arab Women as ‘Subjects.’” The talk was delivered by Suad Joseph, a Lebanese-born professor of […]

By: Ronald Kessler Instead of apologizing to the world, President Obama should be supporting the people of Iran and Afghanistan who want freedom, former director of Central Intelligence James Woolsey tells Newsmax. In Afghanistan, Obama should be endorsing Gen. Stanley McChrystal’s plan to protect locals and patrol with them, as opposed to conducting search-and-destroy raids […]