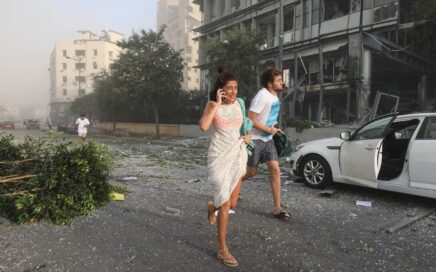 A MASSIVE explosion rocked Beirut, Lebanon on Tuesday. The National News Agency reported that the explosion was at a warehouse for “firecrackers” near the port. More than 78 people were killed and nearly 4,000 injured, including serious lying, in a huge explosion that rocked Beirut’s port on Tuesday afternoon. On Tuesday, an explosion was heard […]

Egypt, Iran Against Israel, US, at UN Nuke Conference

Iran and Egypt are lining up to fight the United States and its allies over Israel at the upcoming United Nations meeting on the Nuclear Non-Proliferation Treaty. Iranian President Mahmoud Ahmadinejad has requested a visa to enter the U.S. to attend the meeting, which begins Monday in New York, but it is not yet clear […]

Iran has the know-how to produce a nuclear bomb and may already have tested a detonation system small enough to fit into the warhead of a medium-range missile, according to confidential papers. The “secret annexe” to this year’s International Atomic Energy Agency (IAEA) report on Iran summarises information submitted by intelligence agencies about the country’s […]