Mike Huckabee: It Was Never About Visiting Israel for Tlaib; It ‘Was About Making a Scene’

Fox News contributor and former Arkansas Governor Mike Huckabee, in a tweet on his Twitter page, blasted Rep. Rashida Tlaib, saying it was never about visiting Israel for Tlaib; it “was about making a scene.” Tlaib whined to go to @Israel and @IsraeliPM said no b/c they let NO ONE in who supports the hate-based […] 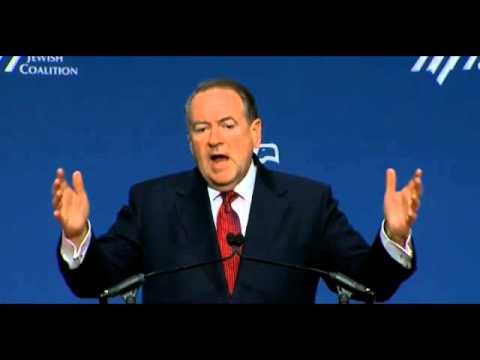 Former Arkansas governor and Republican presidential candidate Mike Huckabee formally rejected the idea of a Palestinian state on Thursday, stating at the Republican Jewish Coalition in Washington that he wants to go on record in rejecting the “two-state solution.” “I consider [the two-state solution] no solution whatsoever,” Huckabee said. “There cannot be two states trying to own the same […]

Huckabee Won’t Run for President in 2012

Former Gov. Mike Huckabee of Arkansas announced on his Fox News radio show Saturday night he will not seek the Republican party nomination for presidential candidate in 2012. He left observers and even his closest aides in the dark until he said on air, “All the factors say go, but my heart says no. And […]

Huckabee: ‘No Value’ In Republicans Attacking Each Other in Primaries; GOP Should Run Against Obama

(CNSNews.com) – Former Governor and presidential candidate Mike Huckabee (R-Ark.) told reporters at the National Press Club that he sees “no value” in Republicans attacking each other in the primaries for the next Presidential election. Instead, Huckabee recommended that the GOP run against President Obama from the start. “I don’t see the other Republicans as […]

Poll: Obama Even With Huckabee and Romney

A new poll whose results were published on Sunday shows that if the U.S. presidential elections were held today, it would be a very close race between the Democrats and the Republicans. According to the poll by Rasmussen Reports, the two strongest candidates against President Barack Obama right now would be Mitt Romney and Mike […]

VIDEO: ‘Huckabee is the Number One Candidate’

Solidly pro-Israel Mike Huckabee leads the polls for the Iowa caucus nomination of a Republican candidate for the 2012 presidential election. A survey by Public Policy Polling (PPP), which has connections with national Democrats, released a poll Tuesday that shows the former Arkansas governor, now living in Florida, a clear favorite in the Iowa caucus, […]

(CNSNews.com) – Major potential Republican presidential contenders do not prevail against a weakened President Barack Obama despite the fact that a plurality of Americans would vote to deny him a second term, a new Quinnipiac poll finds. Americans do not support a second term for Obama by a 49 to 43 percent margin, the survey […]

By: Mike Huckabee The nation was stunned by the senseless and savage cold-blooded murders of 4 young police officers in Lakewood, Washington. Whenever a police officer or soldier is killed, I feel the loss is even more profound for they are the ones who stand between our freedom and anarchy. At the time I write these […]