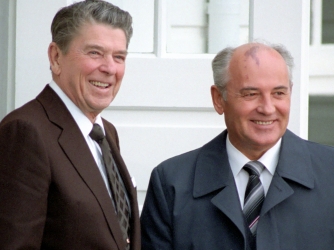 Obama Has Destroyed Trust Between Nuclear Powers, Thus Raising The Specter Of War

Paul Craig Roberts Ambassador Jack Matlock made an important speech at the National Press Club on February 11. Matlock served as US ambassador to the Soviet Union during 1987-91. In his speech he describes how President Reagan won the trust of the Soviet leadership in order to bring to an end the Cold War and […]

Medvedev Speaks the Truth but Would Rather Stay in Power

There may no longer be a Soviet Union, but there are still regional political and economic realities. Russia, as the successor to the Soviet Union, has a strong interest in developments in the Ukraine and in Belarus. Even without reunification, Moscow would like Kiev and Minsk tied to its umbilical cord rather than drifting towards the European […]

Too Much of a Bad Thing: Nemtsov’s Arrest

The authoritarian Russian government may have done too much of a bad thing when it arrested Liberal opposition leader Boris Nemtsov and sentenced him to 15 days in jail for “disobeying police orders.” The Nemtsov arrest, coming shortly after the trumped up charges and kangaroo court proceedings against former oligarch Mikhail Khodorkovsky, now rubbed against […]

Obama’s New START Would Have Been Reagan Non-Starter

In his last gasp effort to rush his New START agreement with Russia through the Senate, President Barack Obama again invoked the name of President Ronald Reagan from the White House yesterday. Three times President Obama cited Reagan as justification for ratification of New START. But while President Reagan did negotiate and sign the Intermediate-Range […]

By: Jim Meyers With Monday marking the 20th anniversary of the fall of the Berlin Wall, Ronald Reagan’s son Michael tells Newsmax that his father was deeply troubled by the wall from the night it was first erected. Michael Reagan also said President Barack Obama’s decision not to attend the anniversary ceremonies in Berlin is “sad,” […]