Heritage Foundation President-elect Jim DeMint delivered last night’s keynote address at the Conservative Political Action Conference (CPAC). We shared some of the most memorable lines from his CPAC speech with Heritage followers in real time on Twitter. Watch the complete video or read the full text of DeMint’s speech Have a look below at the […]

Heritage Foundation President-Elect Jim DeMint appeared on NBC’s “Meet the Press” today to discuss President Obama’s liberal vision for America and how conservatives must counter his radical agenda. As he did during a Saturday speech to the National Review Institute, DeMint called on conservatives to do a better job of explaining how their ideas solve […]

Senator Jim DeMint joined The Heritage Foundation this week, leaving his job in Congress to prepare to become the think tank’s next president in April. Part 1: DeMint on the Future of Conservatism [youtube _Ns0t0Rvwc4 nolink] Part 2: DeMint on Success and Failure [youtube XvqAnv83FhA nolink] Part 3: DeMint on Family and Work [youtube BWEKSS8QWj4 […] 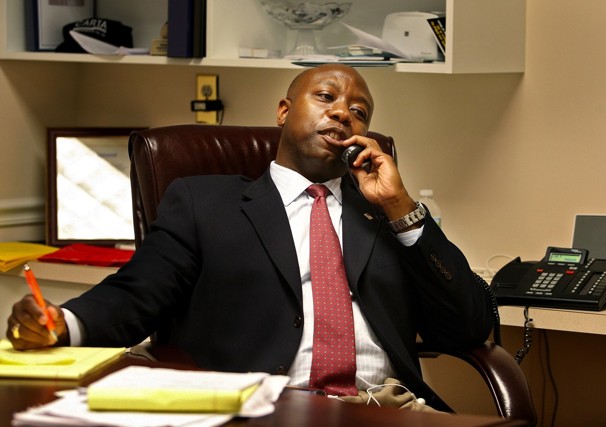 Posted by Aaron Blake and Chris Cillizza on December 17, 2012 South Carolina Gov. Nikki Haley (R) announced Monday that she will appoint Rep. Tim Scott (R-S.C.) to the Senate. Scott will replace Sen. Jim DeMint (R-S.C.), who is leaving the chamber in January to head up the conservative Heritage Foundation. “It is with great […]

Yesterday, Senator Jim DeMint (R-SC) spoke at The Heritage Foundation as part of National School Choice Week and to mark the release of the American Legislative Exchange Council’s (ALEC) Report Card on American Education. The report ranks America’s K-12 schools in terms of performance and progress over the past year, as well as reforms and […]

The Cruise Control Act of 2011

By Tom McClintock Federal spending has ballooned 28 percent during the Obama Presidency while the government has amassed more debt than it acquired from the first day of George Washington’s administration to the last day of George H. W. Bush’s. Our nation is racing toward a fiscal cliff. Yet, as Sen. Jim DeMint noted, instead […]

South Carolinians for Responsible Government has produced a new video featuring Senator Jim DeMint (R–SC) on the importance of school choice. DeMint outlines the keys to achieving educational success not just in South Carolina but in the rest of the country: If we want true innovation in education to reach the widest range of student […]

Big Labor has reasons to celebrate: an ally in White House and a cheerleading left-wing media. By Jeff Poor Business & Media Institute 9/1/2010 2:29:53 PM Jan. 20, 2009, was supposed to be the start of a new post-partisan political climate in Washington. To some journalists, that day was confirmation that a message had been […]

Obamacare: It’s not over yet

By Amanda J. Reinecker On Tuesday, just 36 hours after the House of Representatives voted, President Obama signed into law the massive health care reform bill. Despite its tremendous policy flaws, its lack of bipartisan backing, its widespread public disapproval and its egregious constitutional inadequacies, Obamacare is now the law of the land. » The […]

By CNSNews.com Staff Writer  Sen. Jim Inhofe (R-Okla.) (CNSNews.com) – Senator Jim Inhofe (R-Okla.) announced today that he is supporting a 47-word long bill to repeal the 2,400-page long health care bill that was passed by Congress and signed into law by President Barack Obama on Tuesday.   The text of the legislation backed by […]