While “outrage” has been pretty much the key word this summer, my own reached its upper limits with the news that cartoonist Molly Norris had been forced into hiding by a fatwa threatening her life for an idea: to establish “Everybody Draw Mohammed Day,” on which the world would sketch images of the Prophet Mohammed in defiance of efforts by Muslims to censor such images, and, in some cases, to murder those who created them. Norris’s suggestion came in response to a decision by executives at Comedy Central to censor the satirical show, “South Park,” which aired an episode that joked about showing Mohammed dressed in a bear suit. 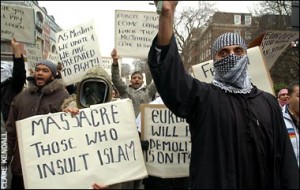 Well, not to religious Muslims, who, unable to distinguish fact from fiction or truth from allegory, view parodies of their holiest figure as an assault on Islam itself. We’ve encountered that kind of ignorant hate before, of course – most famously in the case of the so-called “Danish cartoons,” created by cartoonist Kurt Westergaard for Denmark’s news daily, the Jyllands Posten. In that case, not only was Westergaard targeted for assassination, but Danish and other Scandinavian embassies across the Middle East were torched, and violent demonstrations left numerous people dead.

But Norris didn’t even draw a cartoon of the Prophet. Rather, she sketched a number of commonplace objects – -a teacup, a spool of thread, a domino – with the caption, “Will the real likeness of the prophet Mohammed please stand up?”

Apparently not – at least, not to some people, whose idea of “funny” is what happens when American civilians die. (Cut to images of Palestinians and of Moroccan immigrants in the Netherlands dancing in the streets on 9/11.)

The Yemen-based cleric Anwar al-Awlaki is one Muslim unamused by Norris’s idea. Writing in the English language magazine Inspire, an online publication produced by al Qaeda, he declared: “A soul that is so debased, as to enjoy the ridicule of the messenger of Allah, the mercy to mankind; a soul that is so ungrateful toward its lord that it defames the Prophet of the religion Allah has chosen for his creation does not deserve life, does not deserve to breathe the air.”

Apparently, the FBI doesn’t think so, either; and here is where my outrage boiled over. Cautioning Norris to take al-Awlaki’s threat seriously, they have now advised her to change her identity, move far from her home in Seattle (where she, until now, worked for the Seattle Weekly), and start over – essentially entering into a witness protection program – only without the accompanying protection.

Let me repeat: The U.S. government is suggesting that Ms. Norris change her name, strip away her past, possibly even change her appearance, because she has been targeted by Muslim extremists who are not amused by her work or her ideas. Rather than protect her, rather than defend her, rather than stand up for her Constitutional and democratic rights, declaring their intention to route al-Awlaki out and bring him (and others who are threatening her life) to justice, the American government, as it were, is itself in essence allying with him by taking away her freedom and her life .

And here’s the kicker: it’s likely not that hard to find Al-Awlaki – who has been linked to the Fort Hood massacre, the so-called “Christmas bomber,” and the attempted bombing of Times Square. Anwar Al-Awlaki, born in Las Cruces, New-Mexico, is a citizen of the United States.

And yet, unlike the British, who for years protected and defended Salman Rushdie from the edicts of Ayatollah Khomeini and others, the USA has thrown up its hands, leaving her to her own devices, the victim of the same sick Islamic ideology that permits women to be stoned to death for the crime of having loved.

And so it becomes clear: If we are not involved in a physical war against Islam, we certainly are engaged in an ideological one. And as a woman with a secular, democratic ideal runs, now, for her life, the knights in armor assigned to save her stand aside.

This is how we protect our values? This is what has become, now, of America? That even the suggestion “Draw Mohammed” can cost a woman’s life and the Federal Bureau of Investigation will do nothing? That even the voicing of a threat has America putting down its arms?

We have spent untold billions of dollars in Afghanistan and Iraq at the cost of more than 5,000 US lives.

And all the Islamic militants had to do to conquer us was speak.

Such is the power of the word: and America now sits silenced, silent, dumb.

The most striking line in President Obama’s address to the UN General Assembly was his quip about “a future where...