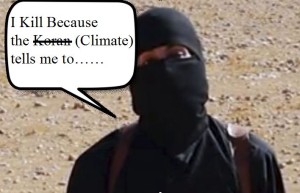 President Barack Obama’s attempts to provide cover for Islamic terrorists by first declaring global warming/climate change “a national security threat” and then excusing their ongoing carnage with the absurd claim that it was global warming that set them off, must be the biggest political scam in all of human history.

It was supposedly feeling the ravages of climate change that set Islamic terrorism on a worldwide rampage?

How do the mainstream media, Obama’s so-called political opponents and the masses let him get away with this outrageous, over-the-top claim?

Could it really be that the bloodthirsty terrorists of our day would give up on pushing for their caliphate and sharia law if only climate change wasn’t such a pain in their rears?

Obama’s reckless claims that it is global warming at the root of Islamic terrorism top even those of alarmists Al Gore, Maurice Strong, and United Nations climate change doomsayers.

Islamist jihadis terrorists were really only “victims”  like all the other ones invented and run off the printing press by the dozens, courtesy of the victim-seeking lib-left

We were all being led to believe that man-made global warming was going to do us in when Al Gore said the seas would rise and take us,  but never really knew that climate change can not only kill you, it can drive you crazy, too.

In Case You Missed It:  Attkisson v. Holder: The Government Spied on Me and Now is Hiding the Guilty Parties

Here were the ignorant chattering classes thinking that Islamist jihadis were terrorists when they were really only “victims”  like all the other ones invented and run off the printing press by the dozens, courtesy of the victim-seeking lib-left.

Ordinary folk board up their store fronts and batten down home hatches when the weatherman warns another hurricane’s on the way, terrorists line up their captives, decapitate them, and send out grisly YouTubes as proof.

With no review of strategy to defeat ISIS, whose ranks have swelled by 17,000 homegrown men and women from more than 90 countries, forthcoming; with this week’s massive celebratory ISIS parade in Ramadi, Iraq, with the Coalition nowhere to be found, this is the latest progress of the same ISIS, Obama nicknamed “Junior Varsity” :

ISIS has overrun the village and archeological site of ancient Palmyra in Syria and now controls at least half of the country’s territory.

Experts estimate the terrorists will profit millions of dollars through the sale of Palmyra artifacts to finance their ongoing jihad.

But Islamic terrorists wouldn’t be as barbaric and brutal if only they didn’t have to put up with climate change.

That, in essence, is the story Barack Obama’s out there shilling, and it’s a story he’s sticking to.

“I understand climate change did not cause the conflicts we see around the world, yet what we also know is that severe drought helped to create the instability in Nigeria that was exploited by the terrorist group Boko Haram,” Obama said in a speech to the U.S. Coast Guard Academy in a graduation ceremony.

In Case You Missed It:  Hezbollah Linked To Stockpiles Of Ammonium Nitrate Uncovered In Europe: Report

Who ever knew that terrorists can get downright surly when temperatures soar, and that it was not Shiites fighting dratted Sunnis when terrorism came home to roost in the Middle East?

At least, not according to Obama:

“It’s now believed that drought and crop failures and high food prices helped fuel the early unrest in Syria, which descended into civil war in the heart of the Middle East,” he added. (Washington Examiner, May 20, 2015)

“As a nation, we face many challenges, including the grave threat of terrorism, and as Americans we will always do everything in our power to protect our country,” he said. “But even as we meet threats like terrorism, we cannot and we must not ignore a peril that can affect generations.”

“The science is indisputable. The fossil fuels we burn release carbon dioxide, which traps heat, and the levels of carbon dioxide in the atmosphere are now higher than they have been in 800,000 years.”

“The planet is getting warmer,” he added. “Fourteen of the 15 hottest years on record have been in the last 15 years.”

Chicken Little was right when he warned a climate change vulnerable world that “the sky is falling”.

But it’s got nothing to do with the drones flying from every direction in the skies over our heads.

If, as Obama posits, there’s no such thing as Islamist terrorists, how can there be a need for boots on the ground in Iraq?

In Case You Missed It:  Black Lives Matter Are Anti-White Racists

Obama’s is a fairytale world of golfing, partying and holidaying while guaranteeing that the life of the masses will be an every day nightmare.

A push by President Obama to earn fast-track authority to negotiate trade deals has conservatives using words like “odd” and...