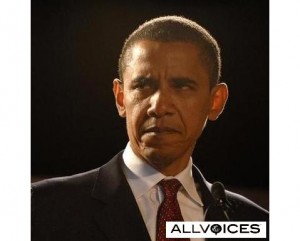 Michael G. Mickey- Do I even have to say what I think about President Obama winning the Nobel Peace Prize, particularly in the aftermath of his recent speech at the United Nations General Assembly during which he threw the nation of Israel under the bus, which was being driven by the terrorist-loving, America-hating Palestinians? Probably not but I’m going to.

Soon after the president’s speech was completed, former U.S. Ambassador to the United Nations John Bolten was interviewed on the Fox News Channel and said what a number of others have since, namely that Obama effectively gave the Muslim world precisely what it wanted when he told Israel to end its “occupation” of Palestinian lands, a move anyone with a pulse and a few living brain cells should’ve known would only embolden the Palestinians to sow strife and contention in the Middle East, hardly a move that encouraged peace or Obama receiving an award for promoting peace, but I’m going to leave that lie for now, at least for a few paragraphs.

The news of Obama’s prize is both disgusting and laughable, all of this reveling in his greatness occurring in spite of the fact he has accomplished so little (of positive noteworthiness at least) that even Saturday Night Live, a show that appears on what I refer to as the president’s official network (NBC), is beginning to crack jokes at his expense!

I’d probably be more irritated at the absolutely nonsensical notion that Barack Obama has made the world a more peaceful place were it not for the fact former president Jimmy Carter and terrorist Yasser Arafat each won the same honor in the past, proving that most any liberal (or terrorist apparently) qualifies to receive one. This is apparently especially true if one is an enemy of Israel, whether by spoken word or deed.

In the aftermath of Obama’s recent UN General Assembly speech, I wondered how much harm he’d done to Israel, not how much more likely peace was to becoming a reality in the troubled Middle East and just look at what’s gone on in Jerusalem since then. Rioting, rioting and more rioting!

During his speech to the U.N. General Assembly days before the Mount riots, Obama used strongly worded language to call for the creation of a “viable, independent Palestinian state with contiguous territory that ends the occupation that began in 1967.”

In Case You Missed It:  White House Promises “Winter of Severe Illness and Death” for Unvaccinated “And Their Families”
Posted in Tyranny and tagged Obama, Peace.