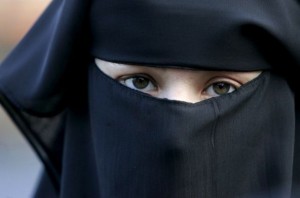 Burqas will be banned in Italy under laws proposed by the government last month.

Legislation to stop Muslim women wearing the hood and other full-face veils such as the niqab will be introduced, equal opportunities minister Mara Carfagna said.

She said: ‘This is about a sacrosanct battle to defend the dignity and rights of immigrant women.

‘A law is being studied that would ban the use of a burqa and niqab, which are not religious symbols – that’s not us saying it, but the top religious authorities of the Islamic world, like the imams of Cairo and Paris.

‘I completely agree with the French initiative, which I think will push other European countries and hence, also Italy, to enact laws on this issue.’

Critics see the burqa as a symbol of the subjugation of women. A poll this week found 71 per cent of Italians are in favour of a ban.

Italian Muslim groups say they advise women against wearing face veils but that a ban would be an attack on personal freedom.

In Case You Missed It:  RED SHIFT: 162 Scientists who used to work for a top US nuclear research base now work for the CCP
Posted in Freedoms, Terrorism and tagged Europe, Islam, Terrorism.

The Obama Trap and the GOP

Posted by Erick Erickson That picture above is a Reuters picture from this Politico column back in September. Remember that?...