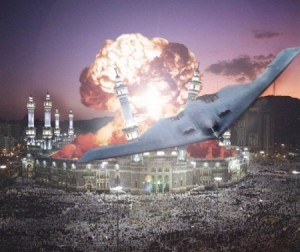 Paul L. Williams, Ph.D., A leading Israeli think tank now recommends that a response by Israel to a non-conventional attack from Arab countries must include attacks on “major Muslim sites,” including Mecca and Medina, Islam’s two holiest cities.

This recommendation is included in a confidential paper from the Begin-Sadat Center for Mideast Security and Policy (BESA).

BESA, a non-partisan and independent institute, is affiliated with the Barlian University in Israel. It purportedly seeks to contribute “to the advancement of Middle East peace” with strategic suggestions.

The report insists that a non-conventional attack from an Arab country must include an attack on sites of “major symbolic importance for the Muslim world.”

“If the source of a terrorist nuclear attack against Israel is unknown, or if it is known to originate with al-Qaeda or Iran, Israel should make it clear that its response will be unlimited and include not just major population centers, but all sites of value, including those of major symbolic importance for the Muslim world,” the paper states.

BESA informs Israeli Prime Minister Benjamin Netanyahu and Rav Aluf Gabi Ashkenazi, Chief of Staff of the Israel Defense Force, that this recommendation must be kept in secret: “A declaratory policy such as this might be highly inflammatory and further exacerbate the religious dimension of the US and Israeli confrontations with the Muslim world. This policy should therefore not be announced officially, as part of Israel’s declared retaliatory posture.”

However, the report also suggests that this strategy must be “made ‘known’ much as the international community ‘knows’ that Israel has nuclear weapons.” It holds that the policy of retaliation on the Muslim holy places can be “leaked” to the media by “a variety of means.”

BECA further maintains that failure to adopt such a strategy will have catastrophic effects for Israel. The report says: ‘A one-time failure to act devastatingly to prevent or retaliate for nuclear terrorism would be an invitation for further attacks and guarantee Israel’s final destruction. At present, the state of the threat is such that the need for a change in Israel’s deterrent policy is not yet imminent, but it must be followed closely to determine the appropriate timing.’

The site of greatest symbolic significance to the Muslim world is the Kaaba, which is located in the heart of Mecca, the birthplace of the prophet Mohammad. The granite structure, according to Islamic lore, was built by the prophet Abraham to house a black stone (presumably a meteorite) that fell to earth “at the dawn of creation.”

All Muslims, no matter where they find themselves, are required to face the Kaaba during prayer. What’s more, they are required to make at least one pilgrimage to Mecca during their lifetimes in order to perform the “tawaf” – – the ritual of walking seven times around the Kaaba in a counter-clockwise direction.

GROUND ZERO MOSQUE: “OUR GOAL IS TO ESTABLISH SHARIAH”

By Walid Shoebat Little is known regarding the founder of the Ground Zero Mosque Faisal Abdul Rauf or his views...