In a far-reaching restatement of goals for the nation’s space agency, NASA administrator Charles Bolden says President Obama has ordered him to pursue three new objectives: to “re-inspire children” to study science and math, to “expand our international relationships,” and to “reach out to the Muslim world.” Of those three goals, Bolden said in a recent interview with al-Jazeera, the mission to reach out to Muslims is “perhaps foremost,” because it will help Islamic nations “feel good” about their scientific accomplishments. 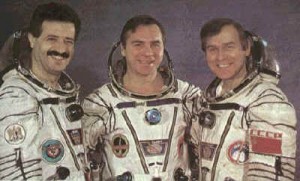 In the same interview, Bolden also said the United States, which first sent men to the moon in 1969, is no longer capable of reaching beyond low earth orbit without help from other nations.

Bolden made the statements during a recent trip to the Middle East. He told al-Jazeera that in the wake of the president’s speech in Cairo last year, the American space agency is now pursuing “a new beginning of the relationship between the United States and the Muslim world.” Then:
When I became the NASA Administrator — before I became the NASA Administrator — [Obama] charged me with three things: One was he wanted me to help re-inspire children to want to get into science and math, he wanted me to expand our international relationships, and third, and perhaps foremost, he wanted me to find a way to reach out to the Muslim world and engage much more with dominantly Muslim nations to help them feel good about their historic contribution to science, math, and engineering.

Later in the interview, Bolden discussed NASA’s goal of greater international cooperation in space exploration. He said the United States, more than 40 years after the first moon mission, cannot reach beyond earth’s orbit today without assistance from abroad:
In his message in Cairo, [Obama] talked about expanding our international outreach, expanding our international involvement. We’re not going to go anywhere beyond low earth orbit as a single entity. The United States can’t do it, China can’t do it — no single nation is going to go to a place like Mars alone.

Bolden’s trip included a June 15 speech at the American University in Cairo. In that speech, he said in the past NASA worked mostly with countries that are capable of space exploration. But that, too, has changed in light of Obama’s Cairo initiative. “He asked NASA to change…by reaching out to ‘non-traditional’ partners and strengthening our cooperation in the Middle East, North Africa, Southeast Asia and in particular in Muslim-majority nations,” Bolden said. “NASA has embraced this charge.”
“NASA is not only a space exploration agency,” Bolden concluded, “but also an earth improvement agency.”

by Tzvi Ben Gedalyahu Time is working against U.S. President Barack Obama, who appears to be “detached" from Israel, former...