Expect to hear a lot about how much the Iraq war cost in the days ahead from Democrats worried about voter wrath against their unprecedented spending excesses.
The meme is simple: The economy is in a shambles because of Bush’s economic policies and his war in Iraq. As American Thinker’s Randall Hoven points out, that’s the message being peddled by lefties as diverse as former Clinton political strategist James Carville, economist Joseph Stiglitz, and The Nation’s Washington editor, Christopher Hayes.
The key point in the mantra is an alleged $3 trillion cost for the war. Well, it was expensive to be sure, in both blood and treasure, but, as Hoven notes, the CBO puts the total cost at $709 billion. To put that figure in the proper context of overall spending since the war began in 2003, Hoven provides this handy CBO chart showing the portion of the annual deficit attributable to the conflict: 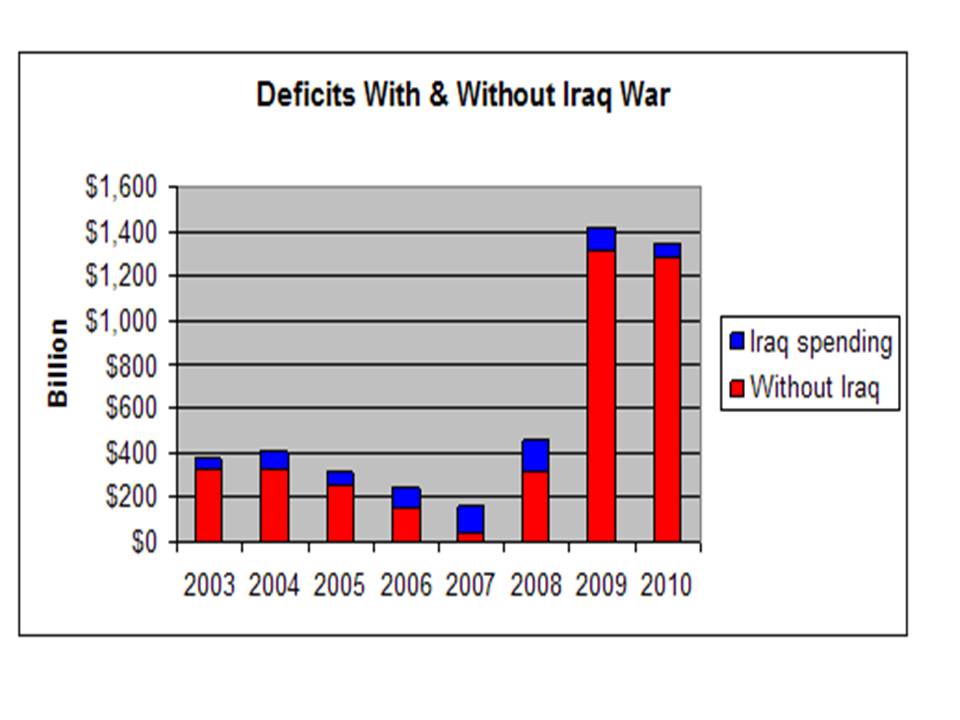 But there is much more to be said of this data and Hoven does an admirable job of summarizing the highlights of such an analysis:
* Obama’s stimulus, passed in his first month in office, will cost more than the entire Iraq War — more than $100 billion (15%) more.
* Just the first two years of Obama’s stimulus cost more than the entire cost of the Iraq War under President Bush, or six years of that war.
* Iraq War spending accounted for just 3.2% of all federal spending while it lasted.
* Iraq War spending was not even one quarter of what we spent on Medicare in the same time frame.
* Iraq War spending was not even 15% of the total deficit spending in that time frame. The cumulative deficit, 2003-2010, would have been four-point-something trillion dollars with or without the Iraq War.
* The Iraq War accounts for less than 8% of the federal debt held by the public at the end of 2010 ($9.031 trillion).
* During Bush’s Iraq years, 2003-2008, the federal government spent more on education that it did on the Iraq War. (State and local governments spent about ten times more.)
Just some handy facts to recall during coming weeks as Obama and his congressional Democratic buddies get more desperate to put the blame for their spending policies on Bush and the war in Iraq.
In Case You Missed It:  WAYNE ROOT: The Radical Communist Takeover of Our Country. America is Finished…Unless We Move Quickly. Here’s a Solution.
Posted in Tyranny and tagged Deficit, Obama.

By Matt Taibbi - Rolling Stone How the nation's biggest banks are ripping off American cities with the same predatory...