Trump is right, Barry Soetoro, AKA Obama is hiding what appears to be a criminal past.

Trump is correct, Barry Soetoro, AKA Obama is hiding something in his past that is very bad… and it may not be his citizenship. (Trump would not say this if he did not know something and he has the money to get the dirt…) 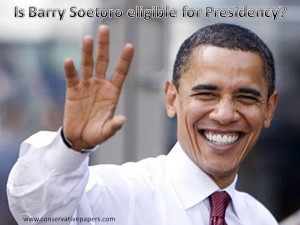 OR Lolo Soetoro may have always been Barry’s legal birth farther. The public does not know for sure at this point who Barry’s father really was and Barry himself may not know.

Barry was raised as a Muslim in Indonesia and attended a Catholic funded school that permitted all faiths to attend.

The public knows Barry Soetoro finished high school in Hawaii as Barry Soetoro and attended Occidental as Barry Soetoro where he did drugs and flunked out of school. He should have gone to one of the many Hawaii private rehab centers.  After dropping out of Occidental, Barry showed up in New York, homeless and on drugs. (Barry’s own admission) Barry then hooked up with a Pakistani to live with and traveled back to Indonesia on his new friend’s dime to renew his Indonesian passport and traveled to Pakistan with him.

Ask any law enforcement officer in a large city or detective and they will tell you homeless young men on drugs in large cities usually end up as committing petty crimes. Barry ended up as a world traveler with a degree… (Not likely)

Barry Soetoro returned to New York from Pakistan and began using the fictitious name “Obama” for some reason. (again Barry Soetoro’s own admission) One could only suspect that a person addicted to drugs returning from Pakistan to New York, the main route for Afghan heroin into the U.S., maybe Barry had a reason to start using a new name. There are literally over 1 million open warrants on file in New York… maybe Barry is one of them?….

After spending some time in New York allegedly working under the name “Obama”, It appears Barry used the fictitious name “Barrack Hussein Obama” for the first time to file his federal taxes in Connecticut at a Post Office Box for the purpose of evading paying taxes in New York and /or to establish a new identity. (This is a felony with no statute of limitation.)

When the IRS received Barry Soetoro’s federal tax filing, the IRS could not attach the name Barrack Hussein Obama to the SSI number provided or the address provided. So the IRS assigned the fictitious name “Barrack Hussein Obama” a tax ID number for a person from Connecticut (Where Barry allegedly and unlawfully filed a federal tax form using a false name). Barry Soetoro began using the tax ID number as his SSI number when using the fictitious name Barrack Obama. This is why Barry Soetoro has a Connecticut SSI number. When I worked for the IRS, I saw this occur more than once and yes, it is a felony to knowingly file a fraudulent federal tax forms. Most of the politicians that cheat on their taxes claim it was an accident. That is how they get away with their tax cheat crimes. Using a fake name is no accident.

It appears Barry fled New York to Chicago using his new identity to get a job . He likely ordered a fake diploma to bolster his new identity as “Obama”. Fake Diploma’s were very big in the 80’s and diploma mills were even being used by federal workers to get promotions. There is evidence his alleged attendance at Columbia was faked (Barry never attended Columbia) and Barry lied his way into Harvard (he had no transcripts to get in)… Including telling the Saudi royal family he was fighting in Afghanistan with the Muslim Jihad against the Russians, so they would help him get into a law school.

The Saudi’s apparently loved Barry’s story of Jihad in Pakistan/Afghanistan and paid for Barry to attend Harvard under the name “Obama”. The Saudi family has admitted to paying for Obama to attend Harvard and gave Harvard a gift of $20 million dollars. Harvard in turn made their special attendy President of the law review a person that never wrote a single law review…. I guess that is what $20 million buys at Harvard.

It is unlikely Barry was a Jihadist and was most likely a drug mule if anything, maybe even a CIA street hire to haul Afghan heroin back to New York, so the Afghans could buy U.S. made stinger missiles with U.S. dollars to shoot down Russian helicopters?… I hired people over seas to do work below my pay grade all the time, even foreign nationals… I think this is the story Barry told the Saudi’s, but he was most likely really just a drug mule/dealer and probably still wanted on an outstanding warrant in New York.

Barry’s selective service registration is not normal either… http://www.debbieschlussel.com/4428/exclusive-did-next-commander-in-chief-falsify-selective-service-registration-never-actually-register-obamas-draft-registration-raises-serious-questions/

After Trumps team looked at Barry’s selective service filing they noticed it was most likely fraudulent too based on the name he used. Barry did not start using the name “Obama” until he returned from Pakistan (long after he flunked out of school in California) His selective service record (maintained in Chicago coincidentally) shows he registered at a Hawaiian post office as “Obama” in Sept 1980… Problem, Barry was getting high in California at Occidental in Sept 1980 (Barry’s own admission) and was not using the fictitious name “Obama” at that time. Barry began using the fictitious name “Obama” only after he returned from Pakistan. The selective service filing is fraudulent.

Barry returned to Chicago and attend a semi-christian radical black church with his first female love Michelle. Barry admits keeping in touch with Phil Boener, who traveled to New York from Occidental.

Barry still could not get a real job, because he was still a fraud, even with his Harvard degree in hand he could lie and take the Bar exam, but he could not work as a lawyer for a major law firm without a back ground investigation and he would never pass one. So, Michelle got Barry a job at her law firm. Barry never filed a case alone and never filed a motion. He wrote lost of memos according to the law firm where Barry worked. (I think they know Barry is a fraud and don’t want to be sued by previous clients) Barry rescinded his law licenses, so as not to be disbarred for fraud. The Bar knows Barry lied on his application. Michelle also had to turn over her law license for her involvement in corruption with the Chicago mayors office.

With time on his hands Barry, a well spoken black man, was able to get elected to a state office, oddly because he looked for fraud in his opponents voter registrations and got his opponent disqualified from running. Barry a well versed liar was a natural in state politics. He used his political influence to get himself a position as a lecturer at Chicago’s law school. Barry embellished this position as a “professor of law” which everyone knows is completely false. Barry was not a professor or even a specialist at anything but lying.

On a whim Barry ran for United States Senate for the State of Illinois. Politicians do this all the time to make a name for themselves even if they can’t win. At the time the Republican Ryan was a shoe in for the Senate seat, so no real Democrat contenders entered the race, but Barry did. On a fluke after the primary Ryan’s wife Jeri Ryan (Seven of nine from Star Trek) went public that her husband was making her have sex with other people while he watched. Ryan dropped out and Alan Keys moved from Maryland to run against Barry Soetoro.

The election got all kinds of press because there was no blacks in the U.S. Senate and one of these black men was going to be a Senator. Alan Keys did his best to warn everyone Barry was not who he claimed to be, but the public saw him as a carpet bagger. Barry kept the lie going and presented himself as a clean black man that talked like a white man… Illinois elected Barry to U.S. Senate. The Democrats had already began scrubbing Barry’s back ground when Ryan dropped out.

Phi,l Barry’s friend from Occidental, was found working in California as a communications specialist (receptionist) for a dental hygienist school and given a diploma from Columbia and cover story. The rest of Barry’s drug friends were all given jobs or money by the Democrat machine to keep quiet.

Because Barry was such a news maker as the only Black in the Senate, and he could speak like a white man he was made key speaker for the Democrat convention. Barry then decided to run for President to keep the lie going. No one thought to question Barry’s back ground in the Democrt party… They helped cover up the ugly back ground. The only person jumping up and down warning Barry was not who he claimed to be was Alan Keys and he was discarded as just an angry loser.

Now we have a complete fraud sitting in the Office of the President. Clearly the most corrupt, inexperienced, and ignorant President in the history of the United States who’s only quality is that he can lie with a straight face.

Barry Soetoro is as much of a fraud as Bernie Madoff and his house of cards will soon fall down.

In Case You Missed It:  SoCal Jewelry Store Employees Fight Off Hammer-Wielding Smash-and-Grab Thieves with Their Own Fists! (VIDEO)
Posted in Tyranny and tagged Crime, Impeachment, Obama.

Pakistan Overplays Its Hand in Making Demands of U.S.

Pakistan is reportedly calling for a reduction in U.S. drone missile strikes against terrorists sheltering in its tribal border areas,...