The first six months of the “recession” as drawn up above are historically mild, and there’s no reason why the real recession which followed had to be as severe as it was Obamanomics.

… in the five months or so leading up to the 2008 presidential election, Pelosi, Obama and Reid deliberately frightened the economy’s key players with promises of steep tax increases, wealth redistribution, government control of medicine, punitive regulation, and energy starvation.

The rest is history. As BizzyBlog commenter “JoeC” said four years ago (with a bit of paraphrasing), it’s a vivid illustration of “The Democrat Effect: the rational response by entrepreneurs, businesspeople, and investors to imminent or already present excessive government intervention, overbearing regulation, crippling litigation, and taxation, all of which seriously curtail economic activity.”

Those in the administration and the establishment press (but I repeat myself) who try to deny that the economy is worse now than when Barack Obama was inaugurated are essentially saying that the red line’s Month 41 is better than its Month 13. They are willfully blind in one eye and deliberately won’t see out of the other. As contributors to a meaningful debate about solution or providers of information, they are useless. 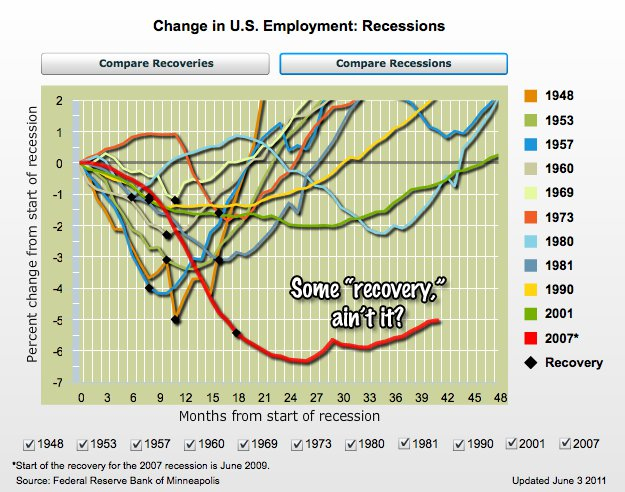 In Case You Missed It:  JUST IN: Sam Bankman-Fried’s Ex Girlfriend Caroline Ellison is Cooperating with Prosecutors After Pleading Guilty to Charges of Fraud and Conspiracy
Posted in Financial, Tyranny and tagged Economy, Obama, Obamanomics, Recession, United Socialist States of America.

Today marks the anniversary of the first published post of The Conservative Papers appearing on the web. On July 7,...