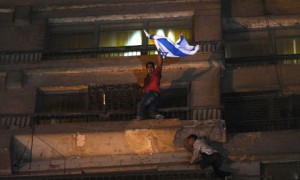 Egyptian protesters have broken into the Israeli Embassy in a high-rise building in Cairo and are dumping hundreds of Hebrew documents off the balcony.

Hundreds of protesters have been converging on the embassy throughout the afternoon and into the night, tearing down large sections of a security wall outside the 21-story building housing the embassy.

The security official spoke on condition of anonymity because he was not authorized to speak to the media.

No one answered the phone at the embassy late Friday.

Egyptian protesters, some swinging hammers and others using their bare hands, tore down parts of a graffiti-covered security wall outside the Israeli Embassy in Cairo on Friday. Thousands elsewhere protested for the first time in a month against the country’s military rulers.

Seven months after the popular uprising that drove Mubarak from power, Egyptians are still pressing for a list of changes, including more transparent trials of former regime figures acused of corruption and a clear timetable for parliamentary elections.

Egyptians have grown increasingly distrustful of the Supreme Council of the Armed Forces, which took control of the country when Mubarak was forced out on Feb. 11 after nearly three decades in power. The council, headed by Mubarak’s defense minister, Field Marshall Hussein Tantawi, has voiced its support for the revolution and those who called for democracy and justice.

But activists accuse it of remaining too close to Mubarak’s regime and practicing similarly repressive policies, including abusing detainees. The trials of thousands of civilians in military courts has also angered activists.

“In the beginning we were with the military because they claimed to be protectors of the revolution, but month after month nothing has changed,” said doctor Ghada Nimr, one of those who gathered in Tahrir Square.

One banner in Cairo read, “Egyptians, come out of your homes, Tantawi is Mubarak.”

Outside the Israeli Embassy, protesters for the second time in less than a month pulled down the Israeli flag from atop the 21-story building.

Egyptian security forces did not intervene as crowds climbed up the embassy’s security wall, pummeling it with sledge hammers and tearing away large sections of the cement and metal barrier, which was recently put up to better protect the property from protests.

Protesters set fire to a police truck outside the embassy and tried to attack a nearby police station but were turned back by the military.

Since Mubarak’s fall, calls have grown in Egypt for ending the historic 1979 peace treaty with Israel, a pact that has never had the support of ordinary Egyptians. Anger increased last month after Israeli forces responding to a cross-border militant attack mistakenly killed five Egyptian police officers near the border.

Protesters marched to the embassy from Cairo’s Tahrir Square, where thousands more demonstrated against Egypt’s ruling generals. Demonstrators in Cairo also converged on the state TV building, a central courthouse and the Interior Ministry, a hated symbol of abuses by police and security forces under Mubarak. Protesters covered one of the ministry’s gates with graffiti and tore off parts of the large ministry seal.

Protests also took place in Alexandria, Suez and several other cities. Up to 90 people were injured, including one in a coma, the Health Ministry said.

About 850 people were killed in the early days of the Jan. 25-Feb. 11 uprising. Tantawi is scheduled to testify in Mubarak’s trial in closed sessions that begin Sunday. The 83-year-old Mubarak is on trial on charges of complicity in the deaths of protesters, a charge that could bring the death penalty.

The judge in the trial banned TV cameras from the courtroom during this week’s sessions, and starting Sunday the proceedings will be closed to the media and the public.

The lack of transparency in trials of members of Mubarak’s inner circle has angered many in Egypt.

“These are all practices of the old regime: repression and restriction on freedoms,” said Cairo protester Khaled Abdel-Hamid.

Ali Mustafa Ali, who traveled from the northern Sinai peninsula to participate in Friday’s protest in Cairo, said he is most angered by the trials of thousands of civilians in military courts, many of them political activists facing years in jail.

Ali said the military must also show they are serious about a transition to civilian rule by announcing a clear schedule for parliamentary elections.

“The military council’s politics are not clear. It seems they are trying to stay in control and not hand over power to civilians,” he said.

The council has not set an exact date for the elections, but they are expected to take place in October or November.

The Muslim Brotherhood, which has the ability to mobilize scores of protesters, did not take part in Friday’s protests. Spokesman Essam El-Arian said the group, which was outlawed under Mubarak, is in support of the military’s promises to hold elections sometime this year.

“These demands take time and can only be carried out by an elected government,” said El-Arian

U.S. Secretary of State Hillary Clinton on Friday said that the Al-Qaeda terrorist group is behind a specific, credible but...