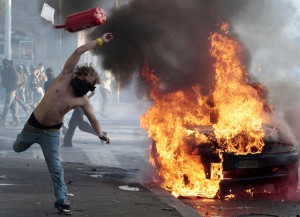 In the past few weeks Americans have watched with interest, bemusement and anger as protests and sit-ins on Wall Street have sparked similar demonstrations around the country. With vague goals of combating corporate greed and calls to rectify all manner of social and economic inequality, this movement seems, to the press at least, to capture a mood of deep discontent among the American people.

Turning point of these protest started in the past few days, violence and extreme use of firebombs and other weapons make the protest appear more like the Riots in Greece than what would be expected in North Amercia.

We have seen this week an Iraq War veteran who suffered a fractured skull during a clash between demonstrators and police. A Mob pounding on a police car, angry about pedestrian injury. Police had to resort to Gaddaffi like tactics and decided on using tear gas on a group of Occupy Wall Street protesters camped in front of City Hall. Police reportedly fired a series of rounds of tear gas on a group of protesters whose only offenses were refusing to leave, making California look more like a third work country under a dictatorship than a civilized free state.

Protesters later blocked off a street with wood, metal Dumpsters and other large trash bins, then lighting fires that leap as high as 15 feet in the air. Riot police arrested hundreds of protesters in the city’s downtown, where bands of demonstrators took violent actions and threw chunks of concrete and metal pipes as well as lit roman candles and throw firebombs at police. Five protesters and several officers were injured in the incident.

In the same event another group of protesters broke into the former Travelers Aid building in order to, as some shouting protesters put it, “reclaim” the building for the people, while destroying the inside by setting fire to the place. Several other businesses were also heavily vandalized by the protesters, also could be heard were deafening pops that some thought were caused by “flash bang” grenades. Fire crews arrived and suppressed the protesters’ fires.

The violence that escalated this week, however, raised questions about the direction of where the movement is headed. If you think a thousand protesters on Wall Street is a trouble sign for our nation, wait until you see the civil unrest that follows the reforms and cuts to government programs needed to bring our national debt under control. Just look at Greece, where government is being reformed, drastic cuts are being made, and the society is unraveling into total uncontrolled chaos.

There are lessons to be lifted from the outraged streets of Athens. As the Greek example shows, government largesse is easy to expand but difficult to cut back without inflaming people into rioting chaos. 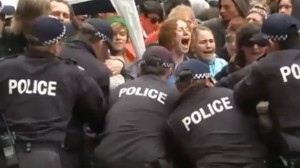 Violence and unrest are escalating in Occupy

For years U.S politicians have framed increases to government benefits as obligatory. Now all that overspending must be pared back and government programs reformed to curb the federal deficit. But each round of needed cuts and reforms will likely cause misery, in an amount substantially greater than the happiness generated by spending increases.

Behavioral economics, which uses social and psychological factors to predict a population’s decision-making behavior, captures this paradox in a few fundamental principles.

First, the principle of “loss aversion” explains that people hate to lose something more than they value receiving something. So, even if many Americans don’t value existing government programs and spending very highly, they will likely be very unhappy about the loss of those same goods and services to inevitably come.

Whether the United States cuts spending and makes reforms now or later, course correction will be difficult and even potentially dangerous to our nation’s stability. Just look at the resistance of public employees in Wisconsin, Indiana and elsewhere to relatively minor cuts to see how people will contest vigorously any decreases to their benefits and programs.

Reducing the size of government will undoubtedly cause some misery and social dislocation. However, “death” by a thousand small cuts will intensify civil unrest and may produce revolutionary fervor unlike anything we’ve seen in America in our lifetime.

Our nation will be better off by reforming our system radically, in a single dramatic turn, it is inevitable we will face something very like the furious streets of Athens. We have seen nothing yet, this is only the begging of social decay and the collapse of inner structure within our society.

33 Senators Who Know What America Needs

As Washington ties itself up in knots over what the Joint Select Committee on Deficit Reduction, better known as the...