Microphones accidently left on after G20 meeting pick up private conversation between US, French presidents. Sarkozy admits he ‘can’t stand’ Israeli premier. Obama: You’re fed up with him? I have to deal with him every day!

French President Nicolas Sarkozy reportedly told US President Barack Obama that he could not “stand” Prime Minister Benjamin Netanyahu and that he thinks the Israeli premier “is a liar.”

According to a Monday report in the French website “Arret sur Images,” after facing reporters for a G20 press conference on Thursday, the two presidents retired to a private room, to further discuss the matters of the day.

The conversation apparently began with President Obama criticizing Sarkozy for not having warned him that France would be voting in favor of the Palestinian membership bid in UNESCO despite Washington’s strong objection to the move. 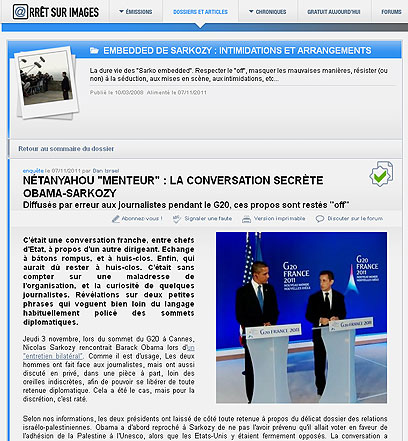 The conversation then drifted to Netanyahu, at which time Sarkozy declared: “I cannot stand him. He is a liar.” According to the report, Obama replied: “You’re fed up with him, but I have to deal with him every day!”

The remark was naturally meant to be said in confidence, but the two leaders’ microphones were accidently left on, making the would-be private comment embarrassingly public.

The communication faux pas went unnoticed for several minutes, during which the conversation between the two heads of state – which quickly reverted to other matters – was all but open to members the press, who were still in possession of headsets provided by the Elysée for the sake of simultaneous translation during the G20 press conference.

“By the time the (media) services at the Elysée realize it, it was on for at least three minutes,” one journalist told the website. Still, he said that reporters “did not have a chance to take advantage of this fluke.”

A member of the media confirmed Monday that “there were discussions between journalists and they agreed not to publish the comments due to the sensitivity of the issue.”

He added that while it was annoying to have to refrain from publishing the information, the journalists are subject to precise rules of conduct.

Friendless in the Middle East