Less than a year after the invasion of Iraq took place in December 2003, Libya’s then-ruler, Colonel Muammar Gaddafi, gave up his Weapons of Mass Destruction program, apparently out of fear that war could come to him and his nation, as it just had to Saddam Hussein and Iraq. His renunciation of terrorism and weapons of mass destruction was counted as one of the major achievements of the Bush Administration. 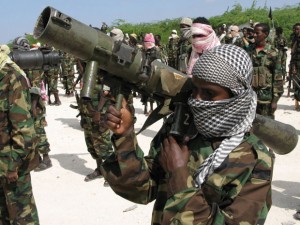 Gaddafi had previously been involved in the 1988 bombing of Pan Am Flight 103, a terrorist attack which took the lives of 270 people, 189 of which were Americans. However, since Gaddafi agreed to the dismantling of his weapons, Libya was no longer seen as a threat to either the United States or to its allies in the free world.

President Barack Obama has been vocal in his support for the revolutions that have taken place around the Middle East: the so-called Arab Spring – a mechanism to remove dictators from power and replace them with possibly other, religiously obsessed, dictators. To some, these revolutions represent a move towards democracy for the troubled region. But to others, these events represent new dangers for the area.

With Libya, while President Obama, “leading from behind” NATO, was ordering the firing of missiles on the Gaddafi regime, he was, as with his abandonment of Egyptian President Hosni Mubarak, propping up Islamist elements that could be even more tyrannical and globally corrosive than Gaddafi ever was.

One of the groups represented in the anti-Gaddafi coalition is the Libyan Islamic Fighting Group, or LIFG. Leaders of the LIFG fought alongside Osama bin Laden against the Soviets during the War in Afghanistan in the1980s. The LIFG’s association with al-Qaeda is the reason why the group is found on the U.S. State Department’s list of Foreign Terrorist Organizations.

How ironic, then, that Secretary of State Hillary Clinton would travel to Libya, as she did this past October, to announce a U.S. foreign aid package to the country. When she arrived, she was greeted by “revolutionaries” in Tripoli, the capital of Libya, where the head of the LIFG and ex-Guantanamo Bay inmate, Abdul Hakim Belhadj, is presently the commander of the Tripoli Military Council, and another Islamist, Osama al-Juwaili, is the head of the Libyan Defense Ministry. Essentially, the entire military apparatus for Libya is, today, controlled by Islamists.

This does not look promising for people in the region, who may not wish to be threatened by yet another militantly Islamist regime; for people who might not wish to be ruled by yet another regime that requires total submission to Sharia Law — which strictly follows the Koran in its unequal justice under law for women and people of religions other than political Islam; where charges of rape require four male witnesses as “proof;” where limbs may legally be amputated for alleged theft; where alleged adulterers may be stoned to death; where homosexuals should be receive the death sentence, and where leaving Islam also mandates the death sentence — or for the people of the United States, who learned on 9/11 that the turmoil of the Middle East is not as far away as one might once have thought.

Prior to declaring war on Libya, President Obama never approached the Congress on the matter and never described how Libya, under the leadership of Muammar Gaddafi, posed a threat to America’s national security. He merely said that the unrest in the country and Gaddafi’s treatment of his people represented “an unusual and extraordinary threat.”

Today, Libya may very well pose an even more unusual and extraordinary threat — to both the free world and America’s national security.

Source: Written by Joe Kaufman is an expert on issues of counter-terrorism and Middle Eastern and South Asian affairs. Currently, he is a candidate for United States Congress in Florida’s District 20, a seat currently held by DNC Chair Debbie Wasserman Schultz.

With their institution at all-time lows in public popularity and trust, it is no wonder that members of Congress are...