Thanks to Obama and another fiscal disaster, each Chevy Volt sold thus far may have as much as $250,000 in state and federal dollars in incentives behind it – a total of $3 billion altogether, according to an analysis by James Hohman, assistant director of fiscal policy at the Mackinac Center for Public Policy.

Hohman looked at total state and federal assistance offered for the development and production of the Chevy Volt, General Motors’ plug-in hybrid electric vehicle. His analysis included 18 government deals that included loans, rebates, grants and tax credits. The amount of government assistance does not include the fact that General Motors is currently 26 percent owned by the federal government making matter even worse.

The Volt subsidies flow through multiple companies involved in production. The analysis includes adding up the amount of government subsidies via tax credits and direct funding for not only General Motors, but other companies supplying parts for the vehicle. For example, the Department of Energy awarded a $105.9 million grant to the GM Brownstown plant that assembles the batteries. The company was also awarded approximately $106 million for its Hamtramck assembly plant in state credits to retain jobs. The company that supplies the Volt’s batteries, Compact Power, was awarded up to $100 million in refundable battery credits (combination tax breaks and cash subsidies). These are among many of the subsidies and tax credits for the vehicle. 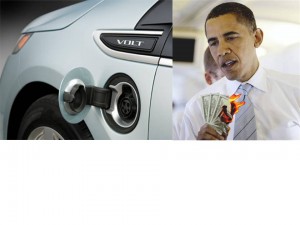 It’s unlikely that all the companies involved in Volt production will ever receive all the $3 billion in incentives, Hohman said, because many of them are linked to meeting various employment and other milestones. But the analysis looks at the total value that has been offered to the Volt in different aspects of production – from the assembly line to the dealerships to the battery manufacturers. Some tax credits and subsidies are offered for periods up to 20 years, though most have a much shorter time frame.

GM has estimated they’ve sold 6,000 Volts so far. That would mean each of the 6,000 Volts sold would be subsidized between $50,000 and $250,000, depending on how many government subsidy milestones are realized.

If those manufacturers awarded incentives to produce batteries the Volt may use are included in the analysis, the potential government subsidy per Volt increases to $256,824. For example, A123 Systems has received extensive state and federal support, and bid to be a supplier to the Volt, but the deal instead went to Compact Power. The $256,824 figure includes adding up the subsidies to both companies.

Additional state and local support provided to Volt suppliers was not included in the analysis, Hohman said, and could increase the level of government aid. For instance, the Volt is being assembled at the Poletown plant in Detroit/Hamtramck, which was built on land acquired by General Motors through eminent domain.

“It just goes to show there are certain folks that will spend anything to get their vision of what people should do,” said State Representative Tom McMillin, R-Rochester Hills. “It’s a glaring example of the failure of central planning trying to force citizens to purchase something they may not want. … They should let the free market make those decisions.”

“This might be the most government-supported car since the Trabant,” said Hohman, referring to the car produced by the former Communist state of East Germany.

According to GM CEO Dan Akerson, the average Volt owner makes $170,000 per year.

(Note: Update after a reaction from a General Motor’s official.)

Greg Martin, director of Policy and Washington Communications for GM, wrote in an email, “While much less than the hundreds of billions of dollars that Japanese and Korean auto and battery manufacturers have received over the years, the investments provided by several different Administrations and Congresses to jump-start the country’s fledgling battery technology and domestic electric vehicle industries (not just specifically for the Volt as Ford’s offering will also use LG Chem batteries and Fisker will use the A123 system for example) matches the same foresight and innovation leadership that other countries are exhibiting and which America has historically taken pride in.”

Martin added that the Mackinac Center’s math was “simple and selective.” However, he offered no data or specifics to support his assertion.

“This is a matter of simple math,” said Hohman. “I added the known state and federal incentives that have been offered and divided by the number of Volts sold. If GM has additional information to add to the public data on the use of taxpayer money, I look forward to seeing it.”

In Case You Missed It:  Who’s in Charge of Joe? Biden Admits He Was Clueless About France’s Knowledge of Australia Submarine Deal Breach: “I Honest to God Did Not Know”
Posted in Financial, Tyranny and tagged Debt Crisis, Financial, Obama, Obamanomics, Taxation.

Hugo Chavez: Between the “Devil” and the “Clown”