I’m sure you’ve heard by now that SOPA is bad and would ruin the Internet putting control on the American internet you would think came out of North Korea or, Iran or China, but  do fear they want the same control right here in the USA.

Have you actually read the bill? If not, it’s worth reading, for two reasons. First, if you are going to oppose a bill, you should know exactly what you’re opposing, not just the vague principle behind it. Second, it’ll provide you with a valuable insight: that these bills are written in an attempt to obscure the truth. 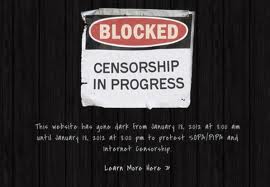 First off, I’m going to qualify that I’m not a lawyer. However, I am a programmer, and that’s made me pretty good at unraveling spaghetti code. If ever a bill was spaghetti, this is it. If a programmer on my team wrote code as convoluted as this bill, I would fire him on the spot. That being said, there may be provisions I’m wrong about; if there are, please do correct me. My intent is to communicate the truth of this bill as cleanly as possible.

Here is the full text of the bill, as of Jan. 15, 2012. Open a copy, because I’ll be referring to it. It helps to click the “Printer Friendly” link to access a single-page view of the bill.

Section 102(a)(2) permits the attorney general to take action against foreign sites (i.e., sites that do not fall under U.S. jurisdiction) if “the owner or operator of such Internet site is facilitating the commission of [copyright infringement].”

We’ll expand on this further down, but the really scary thing here is that there isn’t any qualification that the site be solely for the purpose of theft, only that it facilitate it. Since copyright violation is ridiculously easy, any site with a comment box or picture upload form is potentially infringing. Furthermore, DMCA Safe Harbor provisions are no defense. You, as a site operator, become liable for copyright infringement committed by your users, even if you comply with DMCA takedown requests.

This isn’t quite as bad as the rest of the bill because the power lies with the attorney general, rather than the copyright holder. But it’s not good, either. The language is so broad that it could be wielded against most any foreign site the AG chooses to target.

Effectively, this bill gives the attorney general the power to fully censor foreign sites that the government does not have jurisdiction to take down directly. The most immediate example is WikiLeaks — under such an order, your ISP would be forced to block your access to Wikileaks. Once the technical means to do this are in place, then it becomes very easy for this power to be extended.

SEE ALSO: SOPA Will Take Us Back to the Dark Ages, by Mashable’s Editor in ChiefImplementing censorship protocols and giving the keys to the government is a scary, scary thing, and SOPA should be opposed simply based on this provision alone. But that’s not all.

The really unsettling part of the bill is section 103. It is titled “MARKET-BASED SYSTEM TO PROTECT U.S. CUSTOMERS AND PREVENT U.S. FUNDING OF SITES DEDICATED TO THEFT OF U.S. PROPERTY.” On a first reading, it doesn’t sound that frightening. Read through section A1.

Wow, now there’s a chunk of legalese that’ll make your eyes gloss over. Let’s cut straight to the nasty bits.

An `Internet site is dedicated to theft of U.S. property’ if [a portion of the site is US-directed] and is used by users within the United States and is primarily designed or operated for the purpose of offering services in a manner that enables or facilitates [copyright violation or circumvention of copyright protection measures].

This means that YouTube, Facebook, Wikipedia, Gmail, Dropbox and millions of other sites would be “Internet sites…dedicated to theft of U.S. property,” under SOPA’s definition. Simply providing a feature that would make it possible for someone to commit copyright infringement or circumvention (see: 09 F9 11 02 9D 74 E3 5B D8 41 56 C5 63 56 88 C0) is enough to get your entire site branded as an infringing site.

Furthermore, you may be painted as infringing if you, the site owner, “take deliberate actions to avoid confirming a high probability of the use of…the site to carry out acts [of copyright infringement or circumvention].” This means if you deliberately decide that it’s not cost-effective to screen every piece of content and determine whether or not it is copyright-free before it is posted to your site (whether there is infringing content on your site or not), then you are labeled as an “Internet site…dedicated to theft of U.S. property.” Simply the act of not actively screening every piece of content makes you a criminal under SOPA.

So, We’re All Infringing, Now What?

Section 103(b) is really hairy, but we’ll attempt to parse through it. I’m not going to copy the whole text here, for the sake of brevity, though I do encourage you to read and understand it. Instead, we’ll discuss the most salient parts.

Payment providers (section (b)(1)) and ad networks ((b)(2)) are required, upon receiving a claim against a site by a copyright holder (section (4)(A)(i)), to cut off all services to the accused site within five days, unless they receive a counter-notification from the operator of the accused site. Note that there is no requirement that the accused be notified of said accusation, and thus, they would have no opportunity to provide a counter-notice. In practice, you’d probably find out about it when you notice that the money stops coming in, maybe a week or two later.

The only way to provide a counter-notice is to agree to submit to U.S. jurisdiction (section (5)(A)(ii)) if you are a foreigner (yikes), and to state under penalty of perjury that your product does not fit the definition of an “Internet site…dedicated to theft of U.S. property.” As we discussed above, it’s nearly impossible to not fit that definition. If you have a comment box, and you state that you aren’t guilty under that definition, you just committed perjury. Enjoy prison. Furthermore:

Any provider of a notification or counter notification who knowingly materially misrepresents under this section…that such site does not meet the criteria of an Internet site dedicated to the theft of U.S. property shall be liable for damages, including costs and attorneys’ fees, incurred by the person injured by such misrepresentation as a result of the misrepresentation.

So, if you provide that counter-notification that you aren’t an infringing site, but if you can possibly be painted to fit the definition of an infringing site (and again, you will be), you are now liable for all of the attacking party’s attorney fees. By replying, you give them carte blanche to sue you with no cost to themselves.

Now, if you provide a counter-notice, or an ad network or payment provider fails to cut off service within five days, then the accusing party may then serve you (the site owner) with a lawsuit. If they can’t get a hold of you, they may serve an in rem lawsuit against your site. If they win the lawsuit (and they will, if nobody is there to challenge them), then the court will award them ownership of your site (likely, the domain). This is the point where your accuser is required to notify you that they are taking action against you. This is how the situation could play out.

In Case You Missed It:  Disgusting George Stephanopoulos and Dossier Publisher Chris Steele Dish on Alleged Pee-Pee Tape Knowing It was Debunked in IG Report
Posted in Freedoms and tagged Democrats, Freedom, Internet.