Dismissed by pundits and GOP insiders just days ago, Senator Rick Santorum won the Minnesota and Colorado caucuses and a non-binding primary in Missouri on Tuesday. 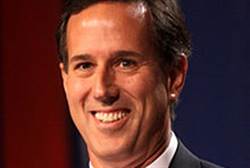 Santorum’s victory in Missouri was largely symbolic as delegates will be decided in district and state conventions later. His Minnesota win was expected, but his victory in Colorado was a genuine upset for Romney who easily carried the state in 2008.

The triple-upset for Romney turned Santorum into an alternative to Newt Gingrich and to the well-funded front-running Romney. While Gingrich has won one state, South Carolina, Santorum has now won four, including Iowa.

Santorum’s showing adds another wrinkle to the contentious GOP primaries that have seen voters refuse to unite behind a single candidate thus far.

Romney scored back-to-back victories in Florida and Nevada leading pundists to once again predict he would march unopposed to the GOP nomination. But Tuesday’s results have shaken things up and embarrassed pundits and political analysts who have once again made the mistake of assuming the GOP primaries were on a steady, predictable track.

Ahead of the upset, Romney’s campaign had sought to downplay expectations, going so far as to admit a likely defeat in Minnesota, but smugly added his opponents had a poor understanding of the electoral numbers saying it wouldn’t matter.

Well-financed and strategically organized, Romney goes into a nationwide campaign with several advantages and may well recover from Tuesday’s embarrassment well before the Super Tuesday competitions on March 6.

But Santorum’s trifecta has proven he’s a scrappy contender whose conservative religious values, family man image, and clearly elucidated positions appeal to a significant portion of the GOP base.

Is Ben Gurion Airport on “occupied” land? That is what Deltas Airlines said – until legal activists gave Delta a...