The debate over Migron, a community in the Binyamin region of Samaria, has snowballed into a head-on collision between the judicial and executive branches, the extreme political left and the center-right. Some analysts say it could even bring down the government of Binyamin Netanyahu. 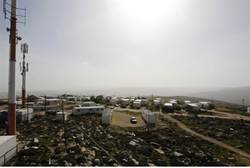 But what is it all about? Why did the matter reach the courts and what is it that the residents are fighting for? A three-minute cartoon by MyIsrael will explain. Watch it once or twice and you will know much of what there is to know about the community that is fighting for its survival.

The head of the Jewish Home faction, Minister of Science Daniel Hershkowitz, told Arutz Sheva Tuesday that he “cannot imagine” a situation in which the community of Migron would be razed.

Minister Hershkowitz said several possible solutions to the problem are being considered but he prefers not to expose them so as not to arouse opposition at this point.

The minister expressed satisfaction from the fact that the entire government still thinks that the solution to the problem should be reached in cooperation with the residents of Migron. “It is possible that if a solution does not present itself, we will have to resort to legislation, although that, too, is not a simple matter,” he said. “Some of the ideas could be voided by the High Court for alleged unconstitutionality.”

Opponents of a law that would legalize communities like Migron, he explained, claim that the fact that a person who claims ownership of land has not stepped up to demand recognition of his ownership cannot serve as justification for another person’s seizing that land.

Discussions of a possible solution are taking place in various forums, said Minister Hershkovwitz, and other ministers besides Benny Begin are involved.

Security forces are preparing for a forcible eviction in Migron, after a High Court decision Sunday to reject a compromise between the residents and the government. Migron was built with government help on land whose ownership is unclear, except for the fact that it is not state land.

In Case You Missed It:  Project Veritas Whistleblower: Washington Nursing Home Patient Dies After Being Given a ‘Chemical Restraint’ to Coax Her Into Taking Vaccine Against Her Will; Was Allegedly Told Jab Is a “Flu Vaccine” – (VIDEO)
Posted in Israel and tagged Freedom, Islam, Israel, Jihad, Judea and Samaria, Netanyahu, Palestinians, Terrorism.

Report: Iran Supplying Weapons to Gaza, but Not to Hamas

The affair between the Hamas terror group and Iran may be over, but the Islamic Republic is still supplying weapons...