Iran is continuing its relentless attempt to force persecuted Christian Pastor Youcef Nadarkhani to recant his faith in Jesus Christ. New reports state that Iranian officials are still pressuring the pastor, who has been sentenced to death for his Christian faith, “to renounce his faith in Christ and accept the prophet Muhammad as his savior.” 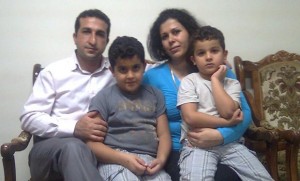 Pastor Youcef, has once again refused, remaining steadfast in his faith. Remember, Iran previously demanded on at least three separate occasions that Pastor Youcef recant his faith and convert to Islam at his latest trial, to which he replied “I cannot.”

What is even worse than the delay, is that the Iranian government seems to be continuing to manipulate and coerce Pastor Youcef to convert to Islam.

Several months ago Iran’s Secret Security had visited Pastor Youcef in prison, without the presence of his Iranian attorney, and ordered him to “read and reflect” on Islamic propaganda. This is a direct and blatant violation of Iran’s own constitution, which provides that the “investigation of individuals’ beliefs is forbidden, and no one may be molested or taken to task simply for holding a certain belief.”

As Tiffany Barrans, International Legal Director for the ACLJ, has stated, “Rather than uphold its legal obligations under the rule of law, which requires it free Pastor Youcef and allow him to peacefully practice Christianity, Iran yet again obliterates any credibility it might have held with the international community.”

Iran’s increased pressure on Pastor Youcef can be directly attributed to increased pressure from the international community. As more and more people around the world have learned about Pastor Youcef’s plight and Iran’s abuses, Iran is feeling the pressure. The Iranian regime is clearly reacting. If it can convince Pastor Youcef to convert to Islam, the story goes away, and its human rights abuses would no longer be in the spotlight.

Last week AILJ put together a great resource that you can share regarding Pastor Youcef, detailing some of the disturbing facts about his case. We will continue to keep you informed as we work to secure his release.

In Case You Missed It:  Same Biden regime that won't even bother to save Americans in Afghanistan claims everyone should take vaccines because the government cares about saving lives
Posted in Freedoms, Terrorism and tagged Freedom, Iran, Islam, Muslims, Terrorism.

Chart of the Week: Obamacare’s Bundle of Budget Gimmicks

President Obama has touted reports from the Congressional Budget Office claiming his health care law would actually decrease the deficit....