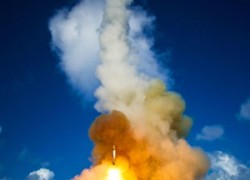 When NATO leaders meet this weekend in Chicago, they are expected to announce an Interim Missile Defense Capability in Europe.

This announcement might read well in the summit’s declaration, but a lot more will need to be done before the members of the alliance will be protected from the ever-increasing missile threat.

According to NATO’s strategic concept, “The greatest responsibility of the Alliance is to protect and defend our territory and our populations against attack, as set out in Article 5 of the Washington Treaty.” This core tenant is what has made NATO the most successful military alliance in history. As global threats change, NATO must adapt too. As ballistic missile technologies proliferate, ballistic missile defense (BMD) is not a luxury for NATO but a necessity.

At the Chicago summit, the U.S. and its allies plan to declare that NATO has achieved an interim capability in ballistic missile defense. The first steps in implementing the Phased Adaptive Approach, President Obama’s missile defense plan for Europe, will be part of this capability.

In the past year, Turkey agreed to host the X-band radar on its territory, and the radar is already operational. Romania and Poland agreed to host land-based interceptor sites in the future, and Spain will host U.S. BMD-capable ships.

Missile defense is an area where NATO’s Smart Defense initiative could actually produce benefits for the alliance as a whole. France, Germany, Greece, Italy, the Netherlands, and Spain have their own short-range missile defense systems. The Netherlands, Germany, and France are also exploring options to contribute sensor capabilities and early warning. With relatively modest investment and adaptation, these platforms could eventually form part of NATO missile defense capability.

In Case You Missed It:  Happy 90th Birthday to an Underappreciated American Scholar

In addition, NATO will need to explore options to field a variety of land-, air-, sea-, and space-based systems capable of intercepting ballistic missiles in all three stages of flight: boost, midcourse, and terminal.

While the announcement of NATO’s Interim Missile Defense Capability in Europe is welcome, this is only the first step in a longer process. NATO leaders need to stay committed to missile defense for the long haul. The security of the alliance depends on it.

NATO Summit 2012: Without New Investment by Europeans, NATO’s Future Is in Doubt

At the NATO Summit in Chicago this weekend, leaders will gather to discuss a number of issues facing the alliance....