Ships carrying Russian commandos may soon sail to Syria to escort strongman Bashar Assad to safety from the country where a rebellion against him is growing fiercer. 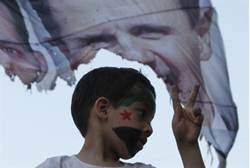 A child at Syrian rebel rally

Reports to this effect were cited by Voice of Israel radio’s veteran “listener” Miki Gurdus, who specializes in listening to radio broadcasts on various frequencies worldwide.

The Interfax news agency said Monday that two Russian navy ships are to sail to Syria to protect Russian citizens and its naval base there. This would be the first time since the current rebellion in Syria began that Russia is sending extra troops to its base in Syria.

Cited by the Associated Press, Interfax quoted an unidentified Russian navy official as saying that the Nikolai Filchenkov and Caesar Kunikov amphibious assault vessels will be heading to the Syrian port of Tartus. The ships appear not to have left their home port in Sevastopol on the Black Sea yet.

The Russian official mentioned nothing about evacuating Assad, but said the ships will carry an unspecified number of marines to protect Russians in Syria and evacuate materials from Tartus if necessary.

Russia has shielded Damascus from international sanctions over its bloody crackdown on the rebellion against the minority Alawite regime. Russia also continued to provide the regime with arms.

Speaking at a press conference Monday, Foreign Minister Avigdor Lieberman said that Israel narrowly avoided a repeat of the Gilad...