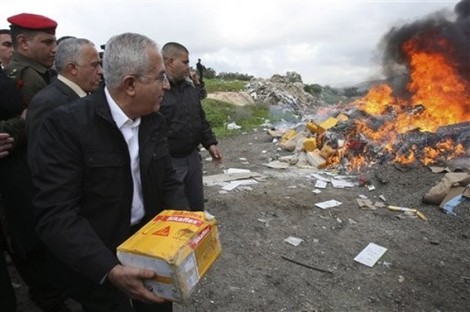 1. It turns out that Israel had no connection to the film at the heart of yesterday’s embassy attacks. First, Jeffrey Goldberg began fact-checking what we thought we knew about “Sam Bacile,” the video’s alleged Israeli writer and director. Then, AP tracked down Nakoula Basseley Nakoula, who was involved in “Innocence of Islam.”

Nakoula told the AP that he was a Coptic Christian and said the film’s director supported the concerns of Christian Copts about their treatment by Muslims.

In a followup post, Goldberg slammed AP and the Wall Street Journal — for endangering Jewish lives by not fact-checking “Sam Bacile” and his alleged Jewish connections:

So, if this is true, then a group of Christians, or at least one Christian, eager to slander Muslims have endangered Jews. How so? The story that “Sam Bacile” is an Israeli Jew, with “100 Jewish donors,” has spread across the Middle East. It is not possible to withdraw such a story. The onus for violence is on the people who commit violence, of course. But if true, this fiction that the anti-Muhammad movie was a Jewish production is cowardly and despicable. Alas, “Sam Bacile” could not have spread the apparent fiction that Jews were behind this film without the help of the Associated Press and The Wall Street Journal, which both reported, without independently checking, “Sam Bacile”s claim to be Israeli.

2. PA TV censors muted a live broadcast town-hall meeting when participants were too critical of the PA leadership. Even the mother of two martyrs gets no respect. Back-story and transcript at Palestinian Media Watch.

3. US judge gives green light to a lawsuit against Hamas’ bankers. Reuters has more on the case of Mati Gill vs. Arab Bank.

• Kudos to Poynter for a very nice roundup of what info about “Innocence of Islam” is confirmed.

• The NY Times is taking heat for publishing a slideshow which includes this AFP photo of an apparently unconscious Ambassador Stevens being dragged through the streets. The NYT denied a State Dept. request to remove the image.

• Care to guess who wrote this thought-provoking snippet? You’ll be surprised:

A New Zealand editor once proudly told me how his own newspaper had re-published the cartoon of the Prophet with a bomb-filled turban. But when I asked him if he planned to publish a cartoon of a Rabbi with a bomb on his head next time Israel invaded Lebanon, he hastily agreed with me that this would be anti-Semitic.

There’s the rub, of course. Some things are off limits, and rightly so.

Another Islamist Assault, Another Western Cringe