In this story from the New York Post we see a woman who is unhappy with an advertisement in the New York subway. This Egyptian “American” woman ( Mona Eltahawy) doesn’t like the message on a subway advertisement poster which proclaims Israel’s enemies to be savages. She tries to paint over the poster with a can of spray paint but there is a feisty lady trying to stand between the advertisement and the paint wielding woman. The woman defending the poster was standing up for the right of all Americans to post such messages in a public area and expect them to go unmolested. This defense of free speech (this is an approved advertisement, legally posted in the New York subway) is clearly a defense of “racism” cries the Egyptian graffiti artist.

This is a tactic that Islam will find most useful to subdue America; when opponents disagree with you, accuse them of 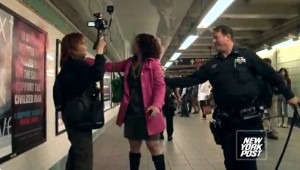 racism. Hurling accusations of racism about in order to divide, silence, and thereby conquer is an old tried and true favorite of the Left. Black Americans quickly learned to use the tactic, quite well in fact, and in recent years other non-whites have also begun to find it a useful tool against America and her historically white majority. In this America of the 21st century, an America with millions of suicidally submissive white men (including millions of Christian men unwilling to stand up for their very heritage and culture), the “cry racism” tactic can easily work for the Muslims.

Will it work? That remains to be seen, however history does show us that the labeling of ones opponents as racist has certainly worked for blacks, and other non-whites in America (and other Western nations).

When bombarded with the racism charge for calling out Islamist savagery and evil, will white Americans fold or defend the right to responsible free speech? Will these Americans, a majority of whom, despite Obama’s protestations to the contrary, proudly claim America to be a Christian nation, stand up and vociferously defend their right to speak freely? It is highly probable that future events will provide definitive answers to those questions.

Will black Christian Americans join the white citizens or team up with the anti-free speech protesters? Their track record shows us that they are very likely to join anyone who is against the white majority.

Will the dominant voices in the liberal media stand up for free speech while the radical Left and hyphenated “Americans” constantly attack them and portray them as racists? On that one, you’d be well advised to wager no money that you fear losing. As all are well aware, the American liberal media (Left and Right) out of fear of being labeled racist, has many times in the past chosen silence or cover-up over informing the white citizens about black-on-white violence. If they won’t defend the right of white Americans to live, should we expect them to defend the right of any Americans to speak?

DENVER — Members of The Heritage Foundation’s policy team joined experts from across the country at the Conservative Political Action...