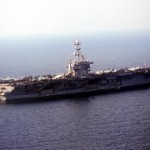 Today, we commemorate and give thanks for the sacrifice and service of the men and women in uniform of the U.S. Navy.

On October 13, 1775, Congress authorized the procurement of two armed vessels to search for British ships supplying munitions to the British army in America. Today, the Navy continues to be a force for good, advancing and securing interests of this grateful nation and its allies around the world.

Over the years, the Navy has evolved to the finest maritime force among all nations. Its members have fought with distinction by sea and land. They have secured U.S. interests and promoted peace, stability, and the values of this great country and other civilized nations abroad.

The U.S. Navy is the key guardian of the world’s prosperity. Today, about 90 percent of global commerce is conducted by sea. The U.S. upholds the principle of freedom of the seas to promote and protect commerce among nations. The U.S. men and women in uniform willingly place themselves in harm’s way to fight those who endanger the principles we all hold dear.

More than 321,000 Navy active-duty personnel and over 107,000 active reserves are ready to fight evil wherever it occurs. Some of these men and women are away from their families, deployed to some of the most unforgiving areas on the planet. They deserve our unwavering support and the tools they need to ensure victory now and in the future.

During last week’s debate, President Obama made an intriguing statement while explaining his deficit hawk credentials. In referencing the programs...