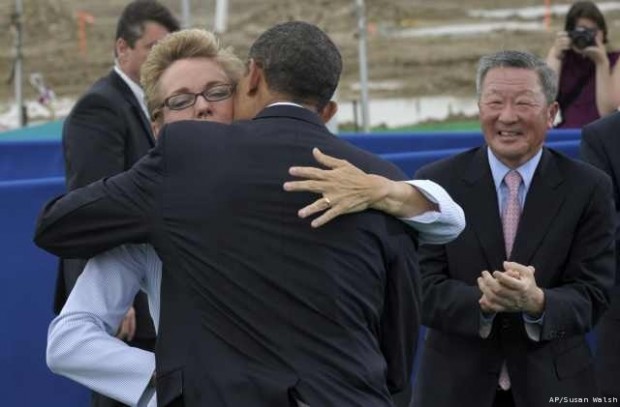 President Barack Obama in 2010 spoke at LG Chem subsidiary Compact Power, an electric battery plant in Holland, Mich., to tout his administration’s decision to pour millions and millions of taxpayer’s dollars into the clean energy industry.

“Our goal has never been to create a government program, but rather to unleash private-sector growth,” Obama said. “And we’re seeing results.”

Why? Because, according to a new report from Target 8, that same electric battery company President Obama spoke at in 2010 is an unmitigated disaster and a shameful waste of tax dollars.

For starters, there’s no work to be done. Employees, who are being paid with the $150 million the Department of Energy awarded the plant, claim they show up and sit around because there’s nothing to do. It has gotten to the point where employees spend most of their time playing cards and/or board games and watching movies to keep themselves entertained.

“There would be up to 40 of us that would just sit in there during the day,” one former LG Chem employee Nicole Merryman, who said she quit in May, told Target 8.

“We were given assignments to go outside and clean; if we weren’t cleaning outside, we were cleaning inside. If there was nothing for us to do, we would study in the cafeteria, or we would sit and play cards, sit and read magazines,” she added. “It’s really sad that all these people are sitting there and doing nothing, and it’s basically on taxpayer money.”

Two current employees claim the idling among workers continues because there’s nothing else to do.

“There’s a whole bunch of people, a whole bunch, filling their time with card games and board games,” one these current employee said.

“There’s no work, no work at all. Zero work,” another current employee added. “It is what it is. What do you do when there’s no work?”

Since the plant’s opening, more than a few workers have quit.

“I thought it might be a decent place to start a career, lots of places to move up,” one former employee, who quit this summer, told Target 8. “You can only do nothing for so long. There were days, sitting around all day doing nothing. … I didn’t play a whole lot of cards.”

“I bailed out of a sinking ship,” he added.

And as for that $150 million DOE grant: The Holland plant has already burned through $133 million, mostly for construction and equipment, with about 40 percent going to foreign companies.

Taxpayers so far have spent about $7 million training the plant’s employees (who claim they haven’t trained in months) and another $700,000 for worker’s health and dental insurance, according to Target 8.

But here’s the best part: Compact Power is furloughing its workers before the plant has even shipped a single battery, TheBlaze’s Mike Opelka reported last week. Yep, the Chevy Volt was supposed to be the plant’s biggest customer but, uh, that hasn’t really worked out.

“Workers say they made test battery cells, starting late last year, perhaps 100,000 or more, and that they did a good job. They say they produced perhaps 4,000 a week. But, they say, that worked ended for the most part last December,” Target 8 report.

They did, however, ship out those test batteries last spring, “apparently for recycling.”

Luckily — well, “luckily” depending on the amount of trust you have in federal bureaucrats — reports of the company’s inactivity have made their way to Washington where the Recovery Accountability and Transparency Board has vowed to take action.

Front page photo courtesy the AP. This story has been updated.