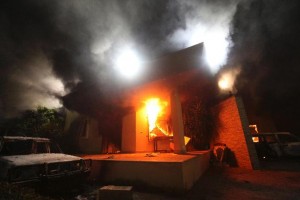 U.S. Consulate in Benghazi after the building was raided by Terrorist.

First we hear of the late Ambassador Stevens clearly expressed concerns about security in the region. Stevens put it this way: “What we have seen are not random crimes of opportunity, but rather targeted and discriminate attacks. Stevens explicitly mentioned the Libyan police and security forces that were guarding the U.S. consulate. He said those forces “were too weak” to keep the site secure.

Now we are finding in the cover-up is that the additional security was either pulled out and refused to make it appear as though Obama’s foreign policy was working in the area and that he had made Libya a safer place. It was going to be a selling point for the elections, instead Obama was left with trying to pin in on the Republicans for funding cuts as the plan miserably failed.

But it get even more interesting, just over two hours after the attack on the U.S. consulate in Benghazi began on Sep. 11, the White House Situation Room was notified that a militant group with connections to al-Qaeda had claimed responsibility, undermining claims by the Obama administration and the media that a video was initially the suspected cause. The email was sent at 6:07 p.m. EDT, which was 12:07 a.m. in Benghazi time. The attack in Benghazi had started just over two hours earlier, at 3:50 p.m. Washington time. Although the White House still was telling us it was a protest due to some youtube video for some 14 days after the notification. The White House continued to send surrogates Jay Carney and UN Ambassador Susan Rice out repeatedly to insist the attack was a spontaneous reaction to a YouTube video.

On September 14th alone 2 days later, the White House Press secretary mentioned the video more than a dozen times. He was point blank asked three times if he meant to connect the video to the Benghazi attack and said (the third time): “We have no evidence at this time to suggest otherwise, that there was a pre-planned or ulterior instigation behind that unrest.”

The problem is the White House did have information, almost immediately, to suggest terrorist aligned with al Qaeda are responsible for the attack. The question is why the White House refused to knowledge that and insisted it was due to outrage over a video.

Is it only a coincidence that the White House’s favored explanation is by far the less politically explosive of the two?

(Photo credit: Mary MacFarlane) A Colorado-based free-market think tank located in Denver challenged the state’s paper of record when it...