While Hamas welcomed a UN vote to recognize “Palestine” on Thursday, on the same day it issued a statement rejecting the UN’s famous Resolution 181, in which the world body voted in favor of a plan to recognize two states in what was then British Mandatory Palestine – one Arab, and one Jewish. 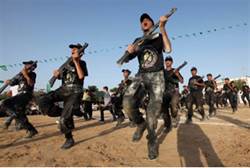 The Arab world rejected the plan and attacked the fledgling Jewish state – an approach which led to Israel growing in size, while Egypt and Jordan seized the rest of the land in the former British mandate.

Hamas’ Thursday statement indicated that its approach to the “problem” of Israel has not changed. “The Palestinian people will not recognize the resolution and will not legitimate the Zionist occupation of the history land of Palestine,” it declared.

The “land of Palestine” extends “from the sea to the river, from the north to south of the land,” it added. The land “will not be divided with anyone,” the group insisted.

The Hamas terrorist group rules over Gaza, which is home to an estimated 40% of the population the Palestinian Authority claims as “Palestinian.” Its goal for that population, it said, remains to “return” them to their “home” inside Israel. PA Chairman Mahmoud Abbas has similarly claimed commitment to the goal of “return.”

As usual, Hamas declared, “The only way to free all of Palestine and return the stolen lands is through battle.”

While an outsider may sense that Hamas’ approach of waging war on Israel has not worked out well for it, the terrorist group insisted that it has won “huge victories” that “overwhelmingly” prove war is the answer. It claimed “the expulsion of the occupier from the Gaza strip in 2005, the victory in the war of salvation [Operation Cast Lead] in 2009, the deal of obligation to the free men [Shalit prisoner swap] in 2011 and the victory in Sijil [Pillar of Defense] in 2012” as proof.

In the wake of the UN vote on “Palestine,” Israel must declare sovereignty over its communities in Judea and Samaria...