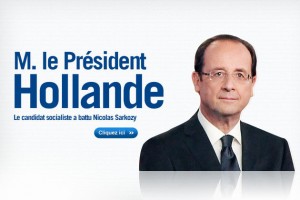 The tax, one of Hollande’s campaign promises, had become a focal point of discontent among entrepreneurs and other wealth creators, some of whom have quit French shores as a result. The ruling comes as the president seeks to cut France’s public deficit to 3 percent of gross domestic product next year from a projected 4.5 percent this year.

“Politically, this has an impact because it was a symbol for French public opinion, and was considered abroad as the emblem of French tax excess, of French tax hell,” said Dominique Barbet, senior economist at BNP Paribas SA in Paris. “In deficit terms, it’s truly negligible.”

The court said Hollande’s plan would have added extra levies of 18 percent on individuals’ incomes of more than 1 million euros ($1.32 million), while regular income taxes and a 4 percent exceptional contribution for high earners would have been based on household income, an e-mailed statement shows.

As a result, two households with the same total revenue could end up paying different rates depending on how earnings are divided among members of those households. That runs counter to a rule of equal tax treatment, the Paris-based court said.

Prime Minister Jean-Marc Ayrault said in an e-mailed statement that the government “takes note” of the court decision on the 75 percent tax band and “will present a new proposal in line with the principles laid down by the Constitutional Court.” The ruling doesn’t call into question deficit targets or the path set out to get there, Ayrault said.

The court’s decision will lower tax revenue by less than 500 million euros in 2013, according to a spokeswoman for the prime minister’s office who declined to provide her name.

Movie star Gerard Depardieu, 64, said he was leaving France “because you consider success, creativity, talent, anything different are grounds for sanction.”

The decision could be positive for France’s bond market because it shows there is a limit to the government’s ability to raise taxes on the wealthy and may decrease the flight risk of more rich French citizens, Barbet said.

The constitutional court lowered a series of other tax increases, calling them excessive or saying they also violated equality of treatment for taxpayers. The tax rate on stock options and free shares was lowered to a maximum of 64.5 percent from a rate of as much as 77 percent. The marginal tax rate on a type of private retirement benefit, known as “retraites chapeau,” was cut to a maximum of 68.34 percent from a planned rate in 2013 of 75.34 percent.

Looking at France’s wealth tax, the court said that unrealized gains couldn’t be included in assessing the tax because it ignores the requirement to take into account a payer’s ability to meet his obligations.

Hollande called on the “patriotism” of the country’s rich to do their part during Europe’s more than three-year-old financial crisis.

A new tax proposal will be presented next year and will apply to earnings for 2013 and 2014, Finance Minister Pierre Moscovici said on BFM television.

Former President Nicolas Sarkozy’s opposition Union for a Popular Movement political party had asked the court earlier this month to overturn the measure.

The tax, which Hollande said would be in place for two years, is part of the 2013 budget law and would have gone into effect starting on Jan. 1.

Hollande’s 2013 budget relies on 20 billion euros in additional taxes: 10 billion euros from companies and 10 billion euros from individuals. In addition to the millionaire tax, Hollande has added new charges on capital gains, an increased tax on wealth, a boost to inheritance charges and an exit tax for entrepreneurs selling their companies. His government has also created a new 45 percent tax bracket for incomes exceeding 150,000 euros per year.

In Case You Missed It:  Get Ready for the Economic Collapse
Posted in Financial and tagged Constitution, Europe, Financial, France, Obamanomics, Socialism, Taxation.

Instagram sold for $1 billion in April, remarkable news for a company that wasn’t even around two years earlier. Meanwhile,...