Senior Egyptian army doctors were ordered to operate without anesthetic on wounded protesters at a military hospital in Cairo during protests against military rule, according to an investigation commissioned by President Mohammed Morsi. 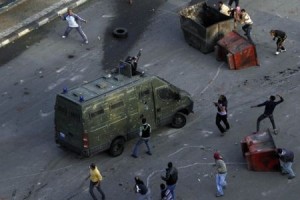 Armored security van sped into the crowd, striking and killing some of the protesters

The report into military and police malpractice since 2011, excerpts of which were presented in the British Guardian on Thursday, also alleges that doctors, soldiers and medics assaulted protesters inside the hospital.

The findings, which relate to the army’s behavior during the Abbassiya clashes in May 2012, are the latest leak to the Guardian of a suppressed report investigating human rights abuses in Egypt since the start of the 2011 uprising that toppled Hosni Mubarak.

Earlier leaks alleged that the military were involved in torture, killings and forced disappearances during the uprising.

The new chapter contains testimony from doctors and protesters about the treatment of injured demonstrators at the Kobri el-Qoba military hospital in Cairo in May 2012.

The chapter concludes by recommending an investigation into the highest echelons of the army leadership.

Even though the report has not been officially published, its status as a presidential document – coupled with the extent of its conclusions – represents the first acknowledgment by the state of the scale of the atrocities both during and since the 2011 uprising.

“I can’t overestimate the importance of this report,” Heba Morayef, the director of Human Rights Watch in Egypt, told the Guardian. “It’s incredibly important. Until today, there has been no official state acknowledgement of excessive force on the part of the police or military. The army always said they took the side of protesters and never fired a bullet against them. This report is the first time that there has been any official condemnation of the military’s responsibility for torture, killing, or disappearances.”

According to a doctor on duty at the hospital, whose identity was withheld in the report, “Military doctors, soldiers and medics inside the hospital assaulted protesters by severely beating them and verbally assaulting them.”

He also described how another senior military officer “ordered doctors not to give any sorts of anesthetic during treatment or stitching. He also ordered that their wounds should not be cleaned.”

The doctor also alleged that a senior military official assaulted the already injured patients “and then ordered his soldiers to lock them up in the hospital basement”.

The Abbasiya clashes in May 2012 – the second major disturbance to occur in the area in less than a year – were sparked by protests against the military rule that followed Mubarak’s downfall. At the protests in May 2012, two died and nearly 400 were injured in battles between protesters and soldiers.

Morsi, meanwhile, has promoted several generals in a show of support for the military, who have been strongly condemned since the report was leaked.

According to the Guardian, Morsi promoted three major-generals to the honorific titles of lieutenant-general. He listened attentively as the head of the armed forces, General Abdel Fattah al-Sisi, denied any accusations of military malpractice.

“The armed forces during the last two years was very, very fond of Egypt and the people of Egypt and did not commit any malpractices whatsoever,” Sisi said.

In the city of Lod, Israelis are subjected to what many consider a nightmarish vision: The flying of the PLO...